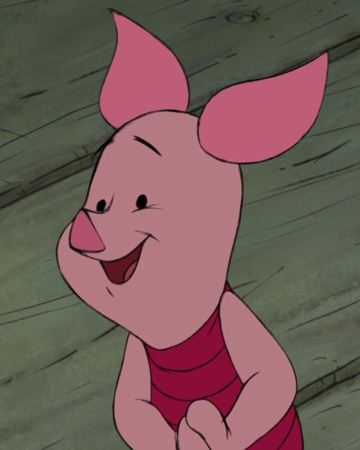 “It’s awfully hard to be b-b-b-b-brave when you’re such a small animal.”

If an ally is disabled while Piglet is frightened he removes frightened, cleanses the disable and all others and grants the ally and himself X reality and X armor.

Green: A small animal
Piglet has a 50% chance to dodge attacks. Whenever he dodges an attack he gains 100 energy.

The dodge has a chance to fail against enemies above level X.

Blue: Blustery day
A powerful wind blows Piglet across the screen dealing X damage to enemies and knocking them back. This resets all debuffs on allies and gives them to enemies.

This also triggers at the beginning of each wave.

Red: Easily scared
For every 4 seconds Piglet doesn’t have any debuffs or disables he gains X skill power and X armor.

Whenever an enemy debuffs Piglet he gains X skill power but his other buffs are reset to 0.
Stat boosts:

The cooldown of “Blustery day” is reduced by 5%.

I hope you enjoyed!

Piglet has a 50% to dodge attacks.

I’ll add the word chance to the green skill

That would be unnoticeable. It’d have to be at least 5% but even that would be very weak.

But then again if you put King Louie or Pooh with it he will buff allies’ damage insanely!

Yeah, but there’s also Hank(Ra) and Goofy(Je) who have disks that do something similar, but with more power. I’d say 10% is a safe number.

It can never hurt to compare your concept to heroes already in the game to get a feel for how strong or weak they’d be.