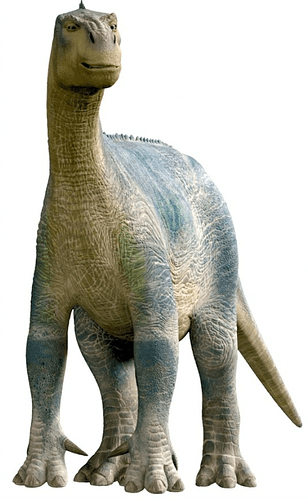 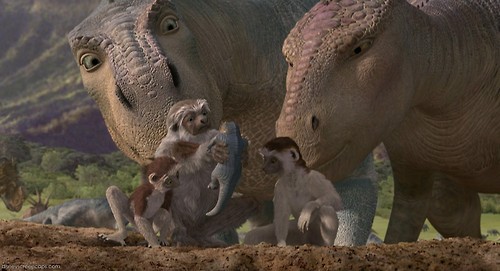 Aladar is an iguanadon from the late Cretaceous. He is kind, sensitive, and cares for his family of lemurs.

Basic attack: Alader stands upright and slashes his thumb at the nearest opponent.

Entrance: he walks into battle, checking behind him for his lemur family to catch up and hop onto his back.

Victory: Aladar and his family starts howling up into the air

Defeat: Aladar falls over as his lemur family bounced off to take cover.

Green Skill: Love Monkey
Zuni (a member of the lemur family) calls out to an enemy, causing them to be confused for x seconds.

Blue Skill: 1, 2, 3, Press!
Aladar digs a small ditch to push down into, causing water to flow up for him and everyone to drink. This pit of wafter lasts for the entirety of the battle and heals x HP when used. It has x uses before it drains out

Red Skill: Yar’s Instruction
All of the heroes on the team have an attack boost and sheild for the first x seconds of battle.

If Aladar & Lemur Family gets added, then characters like Kron, Neera, and others should be added as badges or something for the Dinosaur movie.

Are they from dinosaurs?

I think they are.

Are you referring to Nia from Thomas and Friends? If so, then it’s unlikely

They’re not from Thomas and Friends there from Dinosaurs

I wish but it won’t let me use photos for some reason that I’m not sure about. I’ve tried several times

Yes, it’s from the movie Dinosaur

Your trust level isn’t high enough to post pictures yet.

Okay then. Thank you for that information! I was confused

Btw, I checked again and it’s Neera, not Nia. I apologise!

Not all of them. I meant Nia

Oh. My apologies Defender Momo. I was confused

Well this stinks. My post for this hero idea has been reported for spam. Thanks for the support on this concept!

Maybe remove the links to the Disney wiki.

I have. I’m just now waiting for it to change. I also removed the name of the movie just in case.