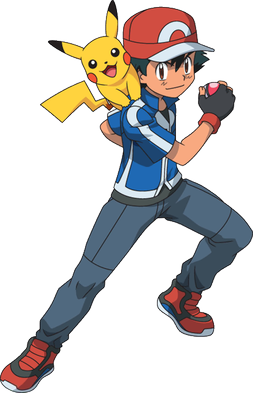 Defeat:ash fall to the ground

Quote:I want to be a pokemon master

White skill:I choose you!
What it does:the player chooses what pokemon ash sends out at the start of each wave the options are pikachu squirtle ivysaur and charizard the pokemon do x amount of damage every 3 seconds

Blue skill:8 badges (name might change lol) ash shows off his 8 gym badges intimidating the opponent and making there attack go down by x amount per second for 3 second

Purple skill:go pokemon (names will change later I’m bad at coming up with names) when ash sends out his pokemon he gains x amount of armor for y seconds

Red skill:gotta catch em all
When ash uses go pokemon he also gains x amount of attack for the rest of the wave
Bonuses:n/a

Friendship:ash and goh (yes he’s not in game but still)
Disk:adventure around the city
Ability:when ash uses go pokemon his allies gain 25% of the armor ash receives
Difficulty:medium

You do not need to add these words to your White Skill.

I don’t know how well this works as a White Skill if it only works at the start of each wave.

Usually, if a White Skill requires a player to choose something, the different options have different effects to them (such as with Kim Possible, Li Shang, etc.), so there really isn’t a point to being able to choose between different Pokemon here if they all do the same thing.

Also, is there a time limit to their bonus damage? You only say it happens “every 3 seconds”, but if this were to last until the end of the wave, it’d be a bit too strong.

By “attack”, are you referring to Basic Damage or Skill Power?

Time limits usually are one set value, not variables.

Again, are you referring to Basic Damage or Skill Power when you say “attack”? Also, this effect is kind of weak by itself. You need one more effect to really make this good.

What do the star upgrades to this effect look like?

What does this mean?

You already acknowledge missing your Green Skill, Red Skill stat boosts, and second friendship, so I won’t talk too much about them, but I do highly recommend that you make complete concepts before posting them next time.

Why can’t they just leave a comment here instead?

Overall not bad, but there is still a lot of room for improvement.

You just made a topic about you making Ash yesterday. I do think that this concept is rushed.

Ash doesnt have ivysaur and skills dont kentioning another charthers