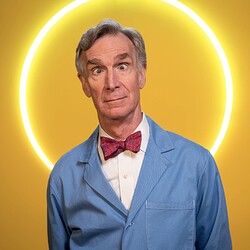 The one and only science guy Bill Nye joins the fray to demonstrate his science skills in the battlefield.
Trial Team: Blue
Role: Midline Control
Stars:

Quote: “The more you find out about the world, the more opportunities there are to laugh at it.”

Animations:
Entrance: Bill Nye enters the battlefield with his science table
Victory: Bill Nye pours a drop into his chemical mixture, causing it to create an elephant-toothpaste explosion.
KO: Bill Nye’s mixture catches fire, and he puts it out with a fire extinguisher.

White Skill - Science Rules (True Damage)
Bill Nye mixes chemicals in a bottle, torches the bottle, and throws it at enemies, creating a flaming puddle that damages enemies for X seconds upon walking into it.

Green Skill - Gas Hazard
For 6 seconds, Bill Nye wears an oxygen mask to prevent enemies from applying disables on him.

Blue Skill - Mixed Well
Bill Nye conducts an experiment with his chemicals for 10 seconds without attacking enemies. Every 2 seconds he is experimenting, he grants allies X stacks of hardy.

Red Skill - Consider the Following
Bill Nye starts off the battle with full energy, and his attack speed is increased by 30% for 6 seconds.

Thank you. The theme song is now stuck in my head.

Is bill nye a disney charther?

No. But you are allowed to create concepts on non-Disney characters

He made a show owned by Disney for a short period of time, so at the same time, “yes” and “no.”