Starting with this weekend’s contest, we are changing the way points are earned with certain tasks. From the start, contests were intended to challenge players to perform those tasks during the weekend and earn points. Due to the way our point system worked, many of these contests rewarded the person who hoarded the most mail messages or missions. We want to award players for participation during the contest.

You’ll notice a difference in the points system, as it’s based on how much players typically earn per day. We will monitor the progress during this weekend’s contest and make any necessary adjustments for the future.

These changes apply to all contests going forward:

Does this also mean for guild contest that if you have completed your daily taks, but not yett collected it’s rewards, the guild influence of that reward is left out of the contest points?

Edit: the same question also apllies to the friend-points you can obtain from the daily quest

What exactly is the point of the contests then? Hoarding was the only way to get an edge. Everyone will score the same now

What about FTN contests? For F2P players to beat it they need to be hoarding stuff for 3 weeks.

What can u collect from your mailbox even counts towards contests???

Everyone will score the same now

Which is the point

Hoarding was never an issue. We all know that this contest is won by players who spends most. Doesn’t matter if that’s city watch contest or influence one there’s always a way to win contest by spending gems and buying contest related deals. Which is OK. I understand that game has to give developers money but I don’t see much point for this changes. Only for me contest starts at 3pm of my time and that means I have to sit and do nothing until that time

Another way to screw tactical players/guilds, which were organizing to win a contest. What will the next step be? Diamonds and stamina purchased before FTN will not count towards the score?

I can see how on the surface this may seem to make it more fair, everyone can only use what they accumulate during that period… but it doesn’t stop purchasing, in fact, it seems to reinforce the necessity to purchase.
Personally I see this as one more giant step in the wrong direction for making the playing field more even for free to play players.
The only way a free to play player has a chance at even making the million points is often by planning ahead. They cannot afford to buy the deals to make 1mil let alone the resources that will be needed to actually place in top 10% or better. The only ‘hoarding’ is your whales that buy every deal and this does nothing to address that.
Hope I get proven wrong.

But what’s the point of this change, 2 years was okay and now this, and it sound just like another way to push players to buy contest-deal during weekends.
And well… there wasn’t any guild gift this week yet

These three exact changes doesn’t sound as a big deal tbh, maybe the first one. But it sounds like just the first step. Well, let us see what your monitoring shows.

FtN needs hoarding but not much of that hoarding stuff needs to be sitting around in your mail.

You’ll notice a difference in the points system, as it’s based on how much players typically earn per day.

I’m hoping this means they’ll try to calibrate the scoring so most players will be able to reach the top progress goal through standard daily tasks, i.e., through spending the amount of diamonds and stamina that a typical middle-of-the-pack player would earn in three days during a FtN contest. Time will tell. 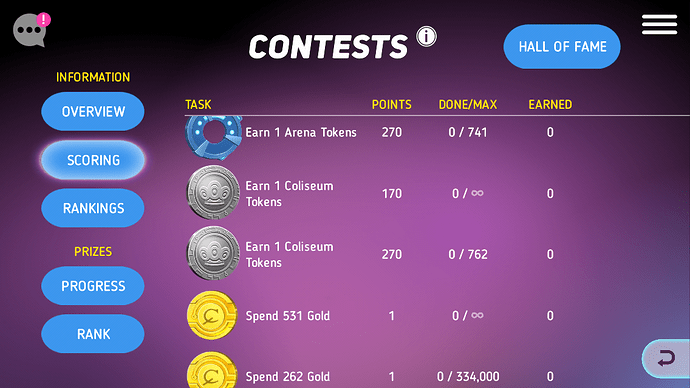 The contest is devastating…

Now just waiting for tomorrow to see all those deals with arena/coli tokens and gold.

How often have arena and coli tokens been offered in cash deals before?

If you look carefully, the whole contest is about spending gold.