Victory: Honey Lemon throws a pink chem-ball into the air, exploding in midair, revealing a puff of pink smoke

K.O.: Honey Lemon throws her chem-purse onto the ground and stomps her feet

White Skill: Gummy Bunny
Honey Lemon covers herself in a pink gummy bunny, shielding her for X damage and absorbs 60% of the damage done to allies

“Gummy Bunny” ends when the shield is gone

When the effect of “Gummy Bunny” ends, Honey Lemon heals all allies an equal amount of the damage that she has absorbed

When Honey Lemon is under the effect of “Gummy Bunny,” she will not be able to attack

This is how she looks like when “Gummy Bunny” is active: 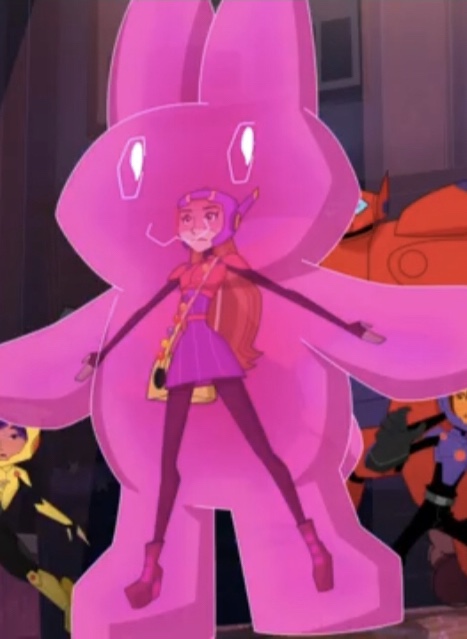 Red Skill: Optimism
Whenever an ally is disabled, Honey Lemon heals them for Z HP and grants them Z armor

This effect is reduced against allies above level Z

Sorry for the delay. I have been at school

So WALL-E’s white but with a longer freeze?

This skill freezes one enemy at a time, WALL•E can freeze all enemies

On her green skill, 5 chem balls per enemy is a bit extreme. That’s 25 shots! Maybe 2 per enemy would be safer.