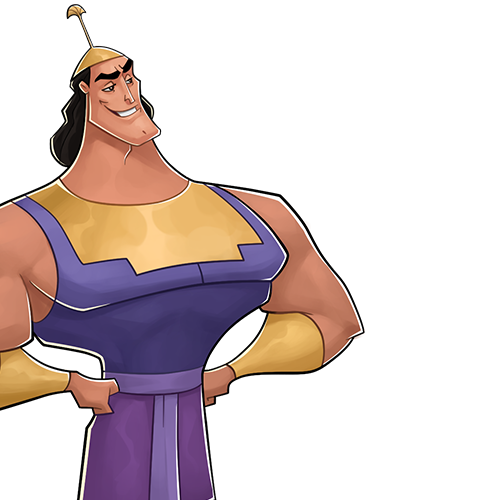 Kronk is a front-line ”Support” character. Kronk will be the December Sign-In Hero.

kronk-skill11500×1500 1.18 MB
Conscience Decision
Kronk can’t decide what to do so he asks his conscience, causing an Angel and Devil to appear on his shoulders. He has an equal chance to listen to either his Angel or Devil and perform their corresponding skills.

kronk-skill31500×1500 670 KB
Pull The Lever
Kronk pulls a lever causing a random enemy to fall through a trapdoor in the floor and, after a few seconds, walk back into the battle.

kronk-skill41500×1500 554 KB
Trap Door
Once per wave, a few seconds after Kronk is reduced to 0 HP, he comes back to battle through an unlikely trapdoor and heals.

kronk-skill51500×1500 1.02 MB
Shoulder Guides
If an enemy deals more than a percent of an ally’s max HP in a single hit, Kronk immediately uses “Pull The Lever” and targets the enemy who dealt the damage to his ally. Kronk’s basic attacks are modified if he last listened to his Angel or Devil during “Conscience Decision”. This does not take effect until Kronk has used his “Conscience Decision.”

New Hero: Kronk will be the December Sign-In Hero

So that is his job?!

Booo— he was supposed to be diamond crate exclusive

And shop rotations are really boring this (next) month, ohh…

And shop rotations are really boring this month, ohh…

Kronk can’t decide what to do

Sorry, but this is just ridiculous… he should do one or the other or give player a choice with a 50:50 if on auto… The heal power is particularly poor as it is likely to result in unhelpful outcomes more often than not. The heroes with the least HP are typically (quite a few exceptions with newer heroes) the back line control / support characters. Many of these (though by no means all of them) have very little use for increased basic damage. Meanwhile, Kronk will be standing in the front dying whilst Delicious Dinner is busy being used to heal someone and give them a BD buff when they are not in danger and have little use for BD buff.

Sounds to me like it’s PerBlue that “don’t know what to do” rather than Kronk.

And I guess there won’t be patch notes 2.5 this week?

or maybe they will be?

Sign In Is Way better for all players!!
You need to Be toooo lucky To Get Diamond Crate Exxlusive hero.

Of course, and magically people still gets diamond exclusive in the first week from the black market, war crates or other crates.

Interesting and really unique skillset for Kronk I got to say :-).

It’s not. Belle was sign-in and is now replaced by newer sign-in.

And now the patch notes bigger one next week

Kronk is a front-line ”Support” character.

This one is pretty cool.

I like how the Angel and Devil affect other skills.

“Pull the lever Kronk. THE OTHER LEVER!”

Trap Door
Once per wave, a few seconds after Kronk is reduced to 0 HP, he comes back to battle through an unlikely trapdoor and heals.

I wonder how those will appear in game.

Perfect. I wonder what the other will be.

Though I’m surprised- I thought he would be the next Coliseum crate replacement for Baloo. But knowing he’s going to be next month’s sign-in is definitely better!

His skills are also pretty good in my book. I especially love “Pull The Lever”. Can’t wait to see how that skill works.

And I am also excited for Jasmine being added to Coliseum shop! I’ve been looking forward to her return in any of the shops for a while now. Can finally work to getting her up where I want her!

This is an update I’m definitely excited for! Can’t wait to see other surprises soon!