Disney villains, the lost ones 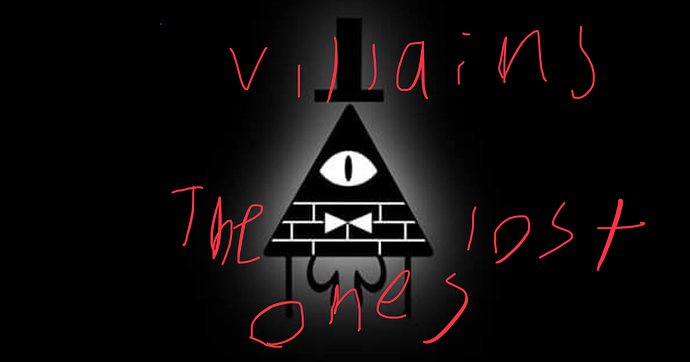 This is my story for the forums. It is about bill cipher gaining the power to destroy all heroes to ever exist, meaning the Disney villains have to save the universe. It will be a 20 part story.

Background info: This rift is not like the one from gravity falls, it is a device Walt created when he first met bill. Walt had ub iwerks and Roy Disney work on the rift, of course bill was possessing Walt. When Roy realized something was wrong, Walt did have a metal plate in his head to keep bill out just like ford. But the rift was finished, but Walt gave it to Mickey to hide. Cipher also possesses judge doom in who framed roger rabbit, (no not really I made this for the fan fic) and the deal was bill could use doom’s body to find the rift, as he thought roger had it, and doom had to work for bill, for all of eternity, while doom would get money and minions. In this universe who framed roger rabbit is a film based on real world events. So in a nutshell in this fan fic, the gravity falls rift was based of real world events. (Also I named it the rift cause idk what to call it). This takes place in the same universe roger rabbit did, and cipher is a toon actor who is actually evil, he is a deranged actor who fears the world is out the destroy him, so he has to destroy them. And the rift can’t effect wasteland

A week for a chapter seems rapidfire though…

Every other day will be a chapter, other than weekends

the mad hatter is a bounty hunter???

Well, frankly idk why I put him in, now hdl make sense, they love to cause trouble and Louie is always looking for money

Also, I think bill is giving off some thanos vibes

I’m so excited for this

Same dude, hope you know smarty is in this

Mickey Mouse, Walt Disney’s most famous creation, is enjoying his dinner. When he suddenly hears a knock at his door. Mickey opens the door, “hiya, I’m Mickey, Mickey Mouse”. Yellow light poured into the house from a strange floating creature. He has the features of a pyramid but he was 2d, a single yellow eye, black arms and legs, and a top hat a bow tie. “The names cipher, but you can call me your new master and overlord for all of eternity”!

Mickey obviously scared looked behind cipher to find judge doom, and greasy weasel, and a giant cage holding a bear. “So Mouse, would you happen to know where the rift might be” said cipher. “Um, what’re talking about” said the mouse. “Oh well seeing as you don’t know what I’m talking about were, going to have to rob the place” shouted cipher, “greasy, go get the rift”

About 30 minutes passed, while the weasel was looking for the rift, the he came out of the mouse’s bedroom. “I got it boss” said the weasel. “Nice job. Now Mickey do you know what I’m going to do with the rift”? Said cipher. “No” said the mouse,”Well I’m going to destroy it, so you and your precious heroes won’t exist” cipher explained. And Cipher did just that. He smashed the rift on the floor and Mickey disappeared, along with the other Disney heroes. “Yes, it’s finally, finally happened, I have destroyed all heroes, once and for all, mwa-ha-ha-ha-ha” cipher screamed.

I can read backwards!

Love how you portrayed cipher

All I have to say is…

and a weasel from who framed roger rabbit

You can’t just say that in a Disney fanfic. You have to make it seem more realistic and less fourth-wall-breaking