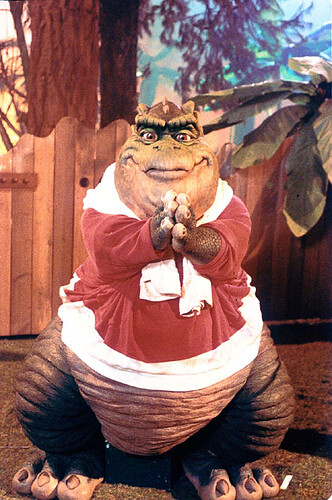 Earl, The Mighty Megalosaurus is here but not so happily as he has to look for his precious 90" television set.

Basic Attack: Earl bites the closet enemy dealing damage with a small chance to heal himself

Entrance: Earl walks in holding his lunchbox eating its contents before tossing it aside. (This doesn’t give him any boosts)

Victory: Earl does a little dance (possibly the Mating Dance?)

Defeat: Earl drops to ground banging on the floor disappointed not able to get his T.V.

White Skill: Tree Pusher
Normal
A Tree suddenly spawns on the ground and Earl gets the sudden urge to push it over. This protects Earl until he pushes the tree, The fallen tree deals X damage to any nearby enemies and give them stun.
This has a chance to fail on enemies above X level

Green Skill: Nuts to War!
Normal
Earl pulls out his jar of Pistachios but notices it’s completely empty so he throws it down in anger and gives him and his allies an damage buff for about 10 seconds.

Blue Skill: Not the Mama!
Normal
Once per wave, when Earl reaches 0 HP Baby appears and bangs him on the head with his frying pan waking him up and heal X HP and give X Armor to himself.

Purple Skill: Georgie in a Million Pieces!
Fantastic
Earl suddenly gets flashbacks of Georgie and begins to go crazy and thrashes at the enemies dealing X damage before being able to finally calm down. This does give him a defense nerf for about 13 seconds

Red Skill: Employee of the Month!

Earl gains X max HP and Tree Pusher deals 35% more damage and can be activated twice both chances able to cause stun to any enemies. Any enemies with an Attack reduction deal 50% less damage to Earl.

The chance to stun is reduced by enemies above X level.

“King of the Dinosaurs.”

Earl and Rex
At the beginning of each wave, Earl scares 3 enemies with the the most HP for about 8 seconds,
after their scare Earl and his Allies gain X Armor

Memories
+15% for each star
+1 scared enemy for each ally that can Scare enemies (max. 2)

Allies: Ursula, The Queen of Hearts, Sulley and Boo

Memories
+10% each star
+1 Tree for each star obtained

Which friendship would you use?

Feel free to give feedback, things you do/don’t like and want changed etc.

If Earl had a costume i’d say it could be his WESAYSO Uniform and Hat or his Captain Impressive outfit.