This’ll be a list with links of my character concepts!
Fred Fred is a Midline Damage hero on the red team!
Fred uses his sci-fi powers to shred through enemies!

“Can you feel it? You guys, do you feel this? Our origin story begins. We’re gonna be superheroes!”

Entrance Animation: Fred walks into the battlefield without the head part of his costume on. A piece of metal falls down from the sky almost hitting Fred, the metal piece startles Fred and he takes a deep breath and flips on the head on his costume.

Win Animation: Fred jumps and cheers at his victory.

Defeat animation: Fred sighs and shrugs his arms with a sad expression on his face.

Invisible Sandwich: When Fred reaches 70% of his max HP he eats an invisible sandwich healing him for X HP and gives himself 400 energy. He can only do this once per wave.

Tail Slap: Fred spins around in excitement, hitting the 2 front most enemies, knocking them back and applies dizzy.

Just a suit: When Fred reaches 0 HP he jumps out of his super suit making him invincible for 7 seconds and heals himself for X HP. (His basic attack from now on until the round ends is him spinning the piece of metal that fell down in his entrance animation)

Super Moves: When Fred uses “Tail Slap” or “Fire Blast” Him and his allies gain 100% attack speed for 4 seconds. This can only be triggered once per round for each skill. “Yeah, just what I was thinking. A trio of trespassers!”

Entrance Animation: The three hyenas tussle into their position and cackle before they ready themselves to fight.

Win Animation: Shenzi laughs and sticks out her paw in a petty way, Banzai grins while raising his back, and Ed blows a raspberry.

Defeat Animation: The three collapse and try their best to get up by putting all their strength into it, but it fails and they flail around scared.

Wildebeest Stampede: The three raise their backs scaring all enemies and startle a stampede of wildebeests. The wildebeests run across the enemies shuffling their positions, dealing X fantastic damage, and stunning them for 12 seconds.
The scare has a chance to fail against enemies higher than level X

Hyena Cackle: The three hyenas cackle healing the team for X HP and increase their allies basic damage by X.

Unsuspected Betrayal: If an ally is charmed, the charm will be removed and Shenzi, Banzai, and Ed grant X basic damage to that ally who was charmed.

Loyally Evil: “Wildebeest Stampede” Now heals allies for X HP and gives them 100 energy as the wildebeests pass them. 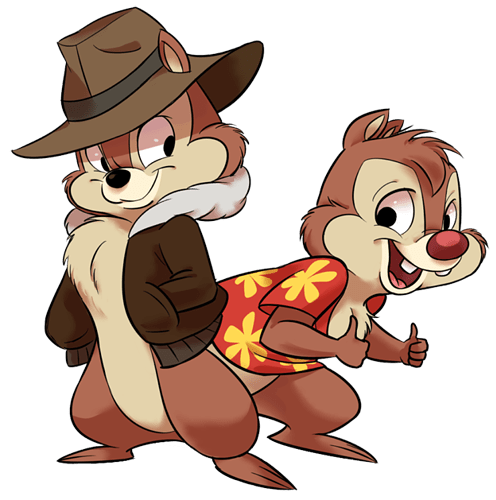 Chip & Dale are a Backline Damage hero on the red team!
Chip& Dale use their nature navigation to see how to handle the enemies!

“We can’t waste our time playing pirates. We’re Rescue Rangers. We’ve got jobs to do.“

Entrance Animation: Chip & Dale ride into the battlefield field on the Ranger Plane and jump off into their places.

Win Animation: The two jump around proudly, raising their hands in the air while they do so.

Defeat Animation: Chip looks down at the ground and sighs, while Dale pounds his foot on the floor in an angry way.

Stashed Peanut Dale will put out a peanut and eat it, healing them for X HP and gives them 200 energy

Rescue Rangers: If an ally reaches 0 HP Chip & Dale will send them a peanut, reviving them and healing them for X HP.

Just Like The Movies: Every time Chip and Dale KO 2 enemies they gain 80% attack speed for 5 seconds and invincibility for 8 seconds. Dumbo is a Midline Control hero on the blue team!
Dumbo uses his circus skills to defeat foes who would bring harm to him or his allies!

“Cast your doubts aside and fly.”

Basic Attack: Dumbo sucks up water from a bucket nearby and squirts it at the enemies with his nose.

Entrance Animation: Dumbo will fly into position with his wings. Once he’s in his spot, he takes a seat on the ground and his water bucket spawns next to him. (Dumbo is similar to Gerald, Marlin, and Nemo in the sense that he can’t walk around the battlefield.)

Win Animation: In joy, dumbo flaps his wings and flies away off screen.

Defeat Animation: Dumbo makes a shocked face and falls over, face first into the water bucket.

Bucket Refill: When Dumbo runs out of water, he pours more from a nearby water fountain and dumps the old water out dealing X normal damage and applies drowning for 12 seconds.

Drowning is a new combat status. Drowning deals damage to enemies over time and makes them unable to use their blue skills.

Pink Elephants On Parade: Dumbo hallucinates, causing pink elephants to take 100 energy from 5 enemies and gives it all to his allies.
The amount of energy stolen has a chance to fail against enemies above level X.

Spiked Water: After 3 refills, Dumbo’s water gets spiked with champagne. From now on his water will apply dizzy to enemies and deal X true damage.

Too Cute To Ignore: When dumbo uses “Ear Flap”, he charms 2 enemies. While they are charmed, all energy the enemies gain willl be transferred to Dumbo and the front most ally. (Split in half.:

I would advise you to make each concept its own comment. That way, it’s easier for people to read through each individual one.

Do you think it’ll help better when I’m able to post the pictures? Kind of like a divider in a way.

Well, sure, but I still think it might get to be a bit long if all of your concepts were only on the top post.

working on spreading all these concepts out individually