There are too much shield counters in the game, so I would like to give an Idea(or try to give one) on how to balance things out! Feel Free to leave any feedback and correct any mistakes! 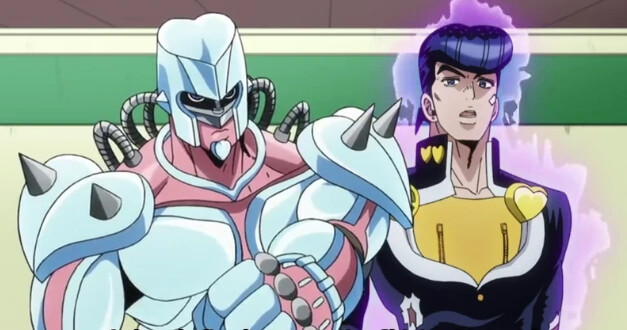 Josuke is a 1 Star Frontline Tank Hero, whose Trial Team is Red.

Healing allies with the same intensity he punches enemies, Josuke will show them why diamonds are said to be unbreakable.

“What did you just say about my hair!?”

Normal Damage
Each 4 basic attacks, Josuke goes after the Hero with the least HP, and punches them 5 times. If it’s an ally, they are healed by Y HP per punch, if it’s an enemy, they are dealt Y damage per punch. This skill will heal 10% more or deal 10% more damage per Armor and Reality buff Josuke has.

Shine On You
All shields in your field gain 10% Damage Negation per Armor and Reality buff Josuke has, up to 50%. Damage that was initially done to a shield cannot be done to Josuke and his allies. Once every 5 seconds, when a shield is destroyed or vanishes, Josuke can restore it with X Extra Max HP.

Is Charged In Battle When: A Berserk Buff on this Hero is about to end.