Hey guys! Here’s our July tier list! Thank you to everybody that joined the stream and helped vote on where heroes belong! Click on the image to zoom in and see everything more clearly.

To start out with let’s get the elephant in the room out of the way, in the biggest move of the day IAN LIGHTFOOT made his way to the very top! He joins Zeus and Shego up in the UNFAIR tier due to his nonstop reflect dominance that we’ve seen since his release which makes him one of the most difficult heroes to counter in the game, especially as more reflect heroes got added over time.

The new heroes joining us today made the exact opposite placements as I was expecting, with Duff Killigan starting out all the way at the top in BotB while poor old Milo Thatch is going to start out in Balanced. But if Prince Phillip is any indicator, Milo may not stay there long. Prince Phillip sees himself making the HUGE push all the way to the top, joining Aurora at the top of the tier list.

The rest of the changes this month are a sad tale of moving everybody down, with Philoctetes, Pleakley, Goliath, and Hopper all moving down to Decent and Helga, Barley, Yzma, and Olaf all seeing themselves move on down to Meh. Philoctetes and Barley are the biggest surprises to me as they both move down 2 entire tiers.

All in All, I hope these are welcomed changes and don’t murder me for moving Philoctetes and Barley down so low. Thanks everybody for your continued support in these tier lists! I look forward to making these each and every month!

If you have suggestions for changes that you want to see to the next tier list, we have a survey that you can fill out so that your voice is more likely to be heard on the next stream even if you can’t be there in person! You may fill it out here: https://forms.gle/P7z95qp15pQvVb968

I’ll also be starting my very first Pokemon Nuzlocke over on Twitch tomorrow at around 12pm EST! I’m going to be playing a randomized version of Pokemon Black! I’m so excited, if you can’t make it, the entire series will go up on my YouTube channel as well! Twitch

IAN LIGHTFOOT made his way to the very top! He joins Zeus and Shego up in the UNFAIR tier

I just don’t see this, to be honest. BotB in Control, sure, as he’s about even with Dr. Drakken (Colette is arguably even better if she has maxed red skill and ideal mods and teammates, but that’s admittedly a huge “if”), but there’s enough ways to counter Reflect and mitigate his damage that I rarely have trouble with him in any situation outside of Ian Creep Surge.

poor old Milo Thatch is going to start out in Balanced. But if Prince Phillip is any indicator, Milo may not stay there long

Yeah, it’s impossible to tell until we can actually get him in the game and get him a disk and some mods, but he looks like he could make BotB. He’s got a weird but possibly OP skill set.

Anyway, my only question is: What’s the tier below “F’s in the Chat”?

I watched you live I think you are amazing

Also I think This is the most accurate tier list I’ve ever seen, everyone underestimates Ariel, Aurora, and Meg.

Ian Lightfoot is mainly good when in Solo 1v1s against Attackers or maybe even Tanks, sense he’s capable of reflecting a ton of damage back at the Opponent… BUT it comes with a cost, sense Ian can only reflect against a minimal amount of characters, and he can easily get eliminated afterwards. But I could be Wrong, but those are the Ian Lightfoots I’ve been running into, I even have a pretty decent Ian Lightfoot myself.

I’m glad Prince Philip is at Best Of The Best! Because I’m tell you guys right now, he’s just hard to take out nearly!

I agree, I’m also very happy that Meg, Ariel, and Aurora are also at Best of The Best!

Does Audrey change your advice on Yellow Invasion team?

who is a better hero: Pocahontas or Angel?

Both very very good. Because angels save lives, I would say angels

I think that Pacha should be on the Unfair tier, sense he is a extremely strong tank. Especially with the Kronk disk giving him more Tenacity, and Max health. His Red Skill that buff Wheelbarrow plow, stunning Enemies every time he uses it. His Basic Attacks are very good, and his healing is extremely broken. And while Pacha does have some Weaknesses, he can break through certain Stuns with Wheelbarrow plow. ‘The Special’ increases his Max HP, making him an Unstoppable brute.

Pacha is not even close to being Unfair IMO. I’ve never seen him in a defence and thought drat, I must counter that Pacha. Unfair heroes should be those who absolutely force you to use quite specific counters or generally lose out - he doesn’t, he’s just a pretty good tank with decent damage output.

I’ve heard otherwise, sense ‘Decent Damage Output’ is a Huge Understatement. Sense even his Basic attacks can knock out opponents in an Instant, or Take a huge chunk of their health. Using Mods that’ll boost his Fantastic Crit, his Green Skill, and Normal Damage just make him even more of a brute. He can easily take out ‘Unfair’ tier characters, and for a tank, he makes for a great attacker. With his Red Skill, he can easily heal every single time he’s in a pinch, and even if you get him to 1% Hp, he will stay at that percent for a little while until ‘The Special’ is done. And that’s Pacha alone, him and the Kronk disk are very helpful, because like I said earlier, it gives him a Tenacity Buff(Which reduces the stun duration) and turns healing Encouragement now heal over time, which is also a very useful move. Pacha is best with a whole team, and not just Solo. But even when he is Solo, he does a phenomenal job. Though, those are my experiences with Pacha.

Pacha can easily solo both Shego and Zeus though, Sense Pacha has his Tenacity that can lower the Duration of Zeus’ White Skill. And can easily knock him out with a few Basic attacks. Shego can use her Special Move, but sense Pacha has ‘The Special’, he can tank through that and knock her out. Especially with Wheelbarrow plow.

Dude, that could be said for Every other character in the game. If you have the Counter, you can kill them in an instant. But, like I said earlier, Pacha works better with a whole team. So it’s gonna be a little harder to kill him. Pairing him up with Chip and Dale + Basil Disk is a fantastic move.

If you know how to counter him he dies in second, same about Phillip, which is even worse than him.

I do agree on Drakken being better than Ian though. 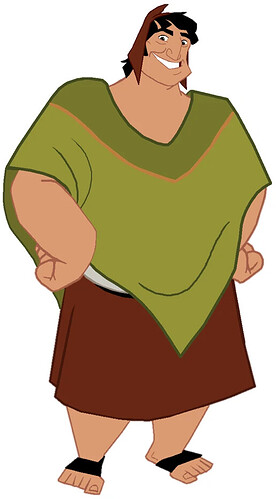 It mainly matters how you treat your Pacha, how you use him, and what Mods you give him that will heavily boost him. But that’s not all, sense Pacha has a ton of tricks up his sleeve.

no, some are just too pathetic and die by a wind.

Zeus is just coin flip chance, you win or he win, as there isn’t any direct counter against him.
Pacha can be stopped by many ways. He is still S-tier, but nothing on the level of Zeus and Shego.

No, Zeus has a ton of Weaknesses. Like Bolt, gadget, Chip and Dale, and characters that can stop his early White Skill move.