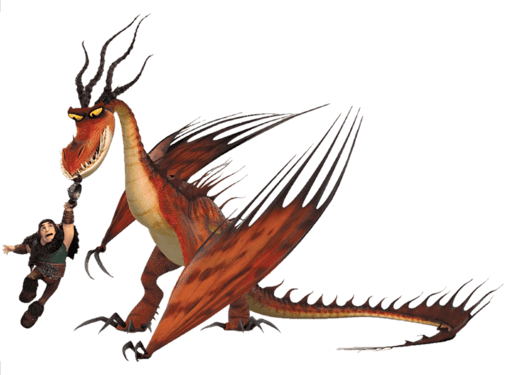 While his dragon Hookfang fills the battlefield with a firestorm, the conceited Snotlout taunts his enemies with arrogance and confidence.

Entrance: Snotlout comes in by riding on Hookfang. Then he jumps down to his position, while Hookfang lands on the frontline.

Victory:
Snotlout: Shows off his muscles and smiles.
Hookfang: Roars and sets his body on fire.

Basic Attack: Snotlout throws an axe at the closest enemy, while Hookfang scratches close enemies with his claws.

Fantastic Damage
Passive: Hookfang enters the battle with Snotlout. He has X Max HP and Y Basic Damage, has his own energy bar and white skill.
Hookfang’s basic attacks apply a stack of “Fatigue” to each enemy hit. Hookfang also deals 100% more damage to enemies with “Fatigue”.
Snotlout takes 75% less damage while Hookfang is on the battlefield, and Hookfang is automatically K.O.ed when Snotlout reaches 0 HP.

Active: (Snotlout) does a battle cry, healing himself and Hookfang X HP and cleansing both from all debuffs. (Hookfang) coats himself with fire and hits close enemies with a burst of flames, dealing Y damage to each enemy hit.

Fantastic Damage
Hookfang roars, dealing Y damage to all enemies and scaring them for 10 seconds.

Blue Skill: The Smartest and Strongest

Purple Skill: Flaming Nightmare
The first time Hookfang reaches 1 HP, he goes Berserk for 9 seconds, and his basic damage is increased by X until the end of the wave.

This Skill will not activate if Snotlout is K.O.ed before Hookfang.

Red Skill: Oy Oy Oy
When Hookfang activates “Flaming Nightmare”, Snotlout’s total damage dealt is increased by 200% and his attack speed by 100% until the end of the wave.

The extra damage is less effective against enemies above level Z.

Hope you enjoyed this concept, it was kinda rushed!