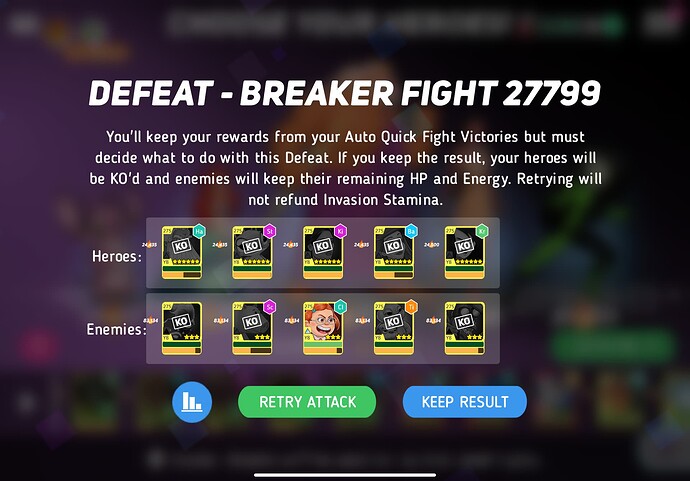 image1920×1341 160 KB
So this may be an invasion glitch or just meilen being way overpowered. While using quick attacks in breaker quests, any time meilen is an enemy she kills the whole team no matter what. I started noticing it once I was a few thousand breakers in but she is either way too strong or something is off. No other character does this.

Edit: it’s auto quick attack. No power ups allowed. Also, congrats to the first troll response. You acted even quicker than I thought.

Maybe your line is just too weak or something.

Use a “hex” boost/buff to stun her before she does the cartwheel. She starts out doing a cartwheel that will destroy your squad no matter how many flames/powerups you have.

Edit: it’s auto quick attack. No power ups allowed. Also, congrats to the first troll response. You acted even quicker than I thought.

May I ask how long it took you to get there? Was it for the gold?

Around an hour per thousand breakers, including the time spent on bots earning stamina. Yes, for gold.

Surge is better for gold. Well if you know how… and obviously not in a top guild.

Earning 20 billion in a week works well for me

20 billion in a week

And I invest like an hour into surge. Not entire 5 days.

Can’t be done on server 23 with the level cap at 275. But thanks for continuing to be condescending. Quarter of a billion a day is about all at this level.

Wait, how do you make gold from invasion breaker fights? Am I missing big time on something?

So, plugging in the numbers using Marshall_Dubstep’s screenshot, we get:

It’s a very long, slow, grindy process, but if you’re willing to put in the dozens of hours per week in Invasion (probably while also watching or reading something, I’m guessing), you too can earn billions of gold per week.

Actually. I made a pretty broken surge spot with O2 modded heroes that are bad. It gives a lot of gold to my teammate’s guild every alternaring Surge.
(We are talking like 3B).

So yes it is possible, people are just unwilling to make this easy lines because they would “suffer” in Arena. Lol
EDIT: And then they complain about not having enough gold…

Now pb will read this whole thread and will nerf gold, again!

Most players can earn more gold than they would ever need from Surge so this source of gold is only for the very extreme people trying to level every hero and skill to max. And I don’t think it scales. My concern is I didn’t really realize that Invasion gives gold, had to do a manual fight and look at the end screen to see it. Its hard to miss especially since it gives very low amounts at the start.

I’m sure as level goes up and surge is giving billions daily it won’t be worth it but like I said, 20 billion in a week is the most efficient way for me on this server. And yes, I do keep every hero at max level and skills. It’s just for fun.

The thing with Meilin is, she’s untargetable during her skill.
So unlike other powerful heroes who are hit and killed, she’ll always get a cartwheel off unless you use the hex debuff (or a hex hero, aka Mim or Mary)

So unlike other powerful heroes who are hit and killed, she’ll always get a cartwheel off unless you use the hex debuff (or a hex hero, aka Mim or Mary)