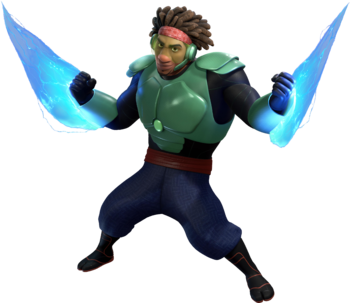 “I have a system. There’s a place for everything, everything in its place”

Wasabi is a front-line tank hero

Entrance: Wasabi walks into the battlefield

K.O.: Wasabi drops to his knees and falls forward

Normal Damage
Wasabi jumps into the middle of the battlefield and spins around with his blades sticking out, dealing X damage to surrounding enemies

Normal Damage
Wasabi jumps forward at an enemy and slices them with his blade, dealing Y damage, stunning them for 4 seconds, and jumps back to his position

Purple Skill: Perfection
At the beginning of every wave, Wasabi applies “perfection” to all allies. When under the effect of “perfection”, allies’ attacks won’t miss. Allies lose “perfection” when they fall below 30% HP

Red Skill: Plasma Shield
Every 20 seconds, Wasabi gains a shield that can deal up to X damage for 8 seconds. If Wasabi performs a basic attack meanwhile, Wasabi’s shield is healed for X HP

This effect is reduced is the ally is above level Z

The blue skill is similar to the thief.

Pretty much why I made it

I will now start doing Unlikely Character Concepts! First I will start with characters from Undertale!

What do you think?

…or am i…NYEH HEH HEH

Could you do an idea for Rapunzel like that? I love the idea for wasabi and was wondering if you could help me out with ideas for Rapunzel.

(I did a concept for Rapunzel already…)

Also can you not revive this thread?