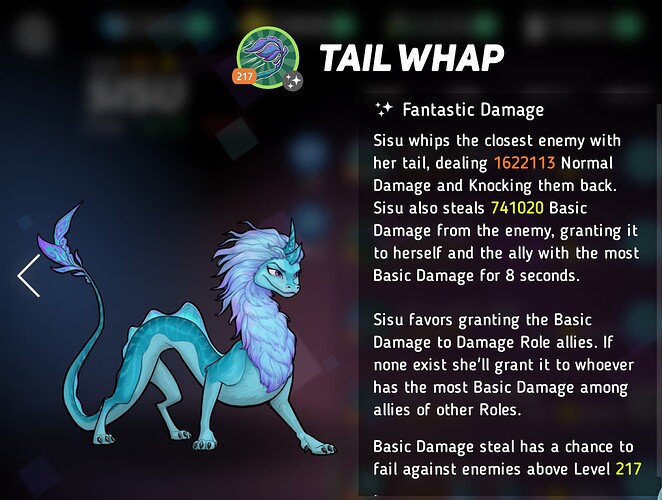 image1847×1393 170 KB
I am thinking this is just not a text error, but she is actually dealing fantastic damage.

I had to Surrender two matches in Heist mode because Sisu could not harm the skeleton at all.
A strong indication she is dealing fantastic damage with this skill.

Well, they just recently changed it, but I don’t know if they changed it to either Normal or True Damage…

Either way, that problem is now in the rear view.

Hey guys just checking in I was able to unlock Sisu

Yes, everyone that played would have

Yes, she is only dealing fantastic damage. In her friendship campaign with Mushu, she has to fight a skeleton. Checking the damage dealt by each character, I could see that she dealt 0 normal damage despite using her tail whip several times.

For fun, I had her tag team with Mushu for that Heist.
It was one full minute of an invincible enemy when they met a Skeleton.
I guess neither of them can deal normal damage.

Mushu’s basic attacks deal normal damage, but they are rare due to his green skill spam.

Man. Chapter 51 is in the patch notes! I’m guessing that Dr. Drakken, Lilo, Ariel, Fairy Godmother, and Bolt will appear as new enemies there. I sure hope that there won’t be the same lineups as well.

why u think dat

Because, the devs are focusing on the original Ducktales. Putting in Della, Lena, or anybody else in the reboot would be metaphysical paradox.

or anybody else in the reboot would be metaphysical paradox.

and yet we have old Kevin Flynn and young Tron. and then there’s Zeus as well.

so it’s just a bad excuse.

it’s just one simple rule, PB staff likes it… it will happen, if they don’t like even if the player-base loves it… no chance.

I know it sound strange. But believe me when I tell you, this is losing battle.

And Syndrome, despite the Parrs knowing about Jack-Jack’s powers.

And I expect there’s some sort of paradox involved regarding Mulan, Li Shang, and Shan Yu, though it’s technically possible they all come from that time period between when Shan Yu kidnapped the emperor and when he took that one-way rocket ride.

Yeah, he shouldn’t be added as well.

despite the Parrs knowing about Jack-Jack’s powers.

Even in beta, months before Incredibles 2, Elastigirl’s new cycle was mentioned in the dialogue.

when he took that one-way rocket ride.

I guess very right before it exploded.

Yes, webby is in the original but she is completely different from the reboot.

That out, she does nothing in that version. Literally.