In the response to that the story content in friendship missions might be removed from the game completely, I have made some prototype pictures for how the story content in the friendship missions could be preserved in a good way and be easily accessible in the game. This is what Polaris said: “I know the writing is very popular, and the team really enjoys creating it, but it is an extremely large amount of time to research, write, edit, and get approval for the friendship dialogue and it’s be…

In terms of the Cosmetics I´d advise to revert the changes done with the Cosmetic Crates as such:

These changes should help make the Collection Levels more progressive and closing the gap between the old players (who could unlock all the stuff via the old system) and new players (who are mostly stuck in low collection level, due to not getting much of the content).

And another change would be that if one already has all the cosmetics available at the time, one cosmetic crate would get the player a certain amount of points. While guaranteed cosmetic crate yields double of that.

The bonus after all Cosmetics at the moment are unlocked doesn´t have to be particularly high at all. Like maybe 1 Common Cosmetic Dupe worth or so.

Apart from that the changes will honor being a long-time player over sacrificing thousands of dollars on cosmetic crates to unlock… something.

Cosmetic crates are just another ploy to get money. Should’ve left the collections alone. There is little value for them as contest rewards also. Rather have rare badges or pretty much anything else

Good post Numi and hopefully PerBlue listens to your feedback :-).
Although, given the cosmetic stat bonuses I assume it would be unlikely that they will change the current cosmetic system, or at least by that much even if they could likely make some Quality of Life changes of course.

At the very least one Quality of Life change I think could be reasonable would be if we could pick a preferred type of cosmetic, and that way be more likely to get the type of cosmetic we would actually like to get.
Shouldn’t be unreasonable I think to just give a higher chance to one type of cosmetics.
Personally I mostly want badge designs, but I usually barely get any so a preference option feature would be good I think.

So yeah, if a Quality of Life improvement in terms of letting us pick a type of a type of cosmetic we would like to be able to more likely get I think would be good overall :-).

The thing about collection is that the most active players before the change now have Collections Level above 200, while others that came with a change in midst or after the change have barely any.

I myself am stuck at 91 right now. When the change came I had maybe 83 or so. There´s barely any progress for players. That´s what I´m talking about. Should it be rewarding? Then there should be some sense of progression. Right now, there´s no sense of progression when in quarter of a year one moves 8 levels. That´s like 1 a month, so 200 is 17 years? Don´t think the game won´t be around for 17 years.

I been here only around 150 days ish

Scoring top 10 or 1% constantly every contest

Even purchased crates total over 300 usd of now

That´s a big oof indeed for purchasing and getting so many and having only lvl6!

More stamina has been given out. If you want to know the most efficient gathering and leveling technique and are non paying or a casual spender I’ll list the ways bellow and how to use your reset items properly.

1.”Daily stamina buys” Buy both 50 diamond cost everyday and stack your stamina.
2.”Collect daily stamina” While stacking stamina keep collecting the daily free stamina quest.
3.”mega market with market refresh items” take advantage of the recent increase of stamina batteries given out and use market refreshes and diamonds only on the mega market.
4.”stamina refresh tokens on double stamina buy day” save your stamina refresh tokens and use only on this certain event while saving stacked stamina.
5.”plan ahead for cap rises” cap rise happens usually once a month In a half so the first half of the newest cap rise try to drop stamina and level your preferred heroes for either pvp or invasion and then use the rest of the time to save save save.
6.”pvp focus” for players who are new and do not spend or are casual spenders try to focus heavily on a good arena team first off because this will be your diamond accumulator to be able to purchase more stamina batteries from your mega market and market refresh items. Once you establish a nice looking arena team and level cap it , you want to then start establishing your coliseum setup to start accumulating more diamonds while staying on top of your arena team focus.
7.”double drop backpacks (normal)” try to save these bad boys because they are rare and not cheap. If you want to know when to use this item save around 800+ stamina batteries and use this on one of the first two contests into the cape rise. Make sure for efficiency you have a x2 hero xp drink Item and a x2 campaign gold item in stock for the upcoming cap rises and any extras you can use if you want to drop your stamina batteries for the first 2 contests of the Recent cap rise.

Efficiency is key and I hope this helps not only you guys but others down the line!

What’s the system behind it, and why it is so bad?

It’s a way for the new players to catch up quicker. I’ve seen this method before and am happy to see that. Generating more maxed players will stabilize the continuous cap rise and keep us veteran players from getting bored on top

when you hear the term “bridging the gap” , that’s what it means my friend. Really a vital part in any game

Explain why this is a bad deal?? Youll easier get a few heroes to 6 stars with these…

Got confused with the other post in guild gifts… and to properly answer it, not sure, I’d love to buy one of those when they pop up

Great post. Never enough to explain to newly joined players how to manage ressources and generate progress without spending thousands.

I’m slightly confused… I thought this new system was supposed to simplify the friendship and refresh the system? I logged into it as soon as the update finished, and its giving me an headache.

Some disks are unlocked, some discs aren’t. I thought the whole point of the update was to unlock the disc when you get access to the campaign?

Not only that, the new ones I have unlocked that don’t auto equip so its hard to know whose is unlocked and whose isnt… doesn’t help the fact even if the associated heroes with campaigns and discs could be white rarity.

Then its that issue, the white rarity heroes associated with the discs. Are we still supposed to painfully grind the heroes to the level of the campaign? If so, is the devs going to up the XP rewards to suffice?

Overall, this friendship revamp is just more headache then simple.

The disks are supposed to unlock after you complete level 1 of the friend campaign. You do not have to however waste resources to unlock friendships and can start the campaign at any level. The campaigns however are the same difficulty so it may be difficult to do so. You don’t have to suffer through the XP process to progress

This is unrealistic from start to finish.
If your opponent in said friendship campaigns are way above your level and rarity you won’t be able to finish the first 5 fights to unlock the disc.
So basically nothing changed, just got stripped of disc power and now to obtain memories you need hero chips that a FreeToPlay person like myself is always short of because I use them to unlock Red skills and mods or the majority of heroes isn’t even 6*. Now I need to farm hero chips to finish some of my discs which are shy to 95 memories or lose progress on 6starring the heroes. My choice not to use them and handle longer mission cycles was taken away from me.
Yeah, sucks to be me I know. I just refuse to pay hundreds of dollars/euros monthly to play a mediocre mobile game.
This is again a marketing effort and PerBlue’s selling point is allegedly QoL.
In reality it’s not. Look at the screenshot. This is what it is about. 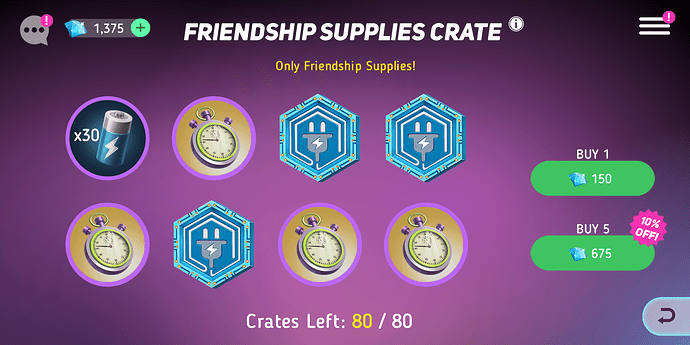 I hope it can be an enjoyable and interesting post, so yeah thank you for taking your time if you decide to check out the post and vote :-).

First of all, welcome to the post and thank you for taking your time to check it out :-). I wanted to make this post in order for us as a whole to be able to voice our thoughts on the Friendship Refresh to PerBlue, but in a way that give them clear metrics and data to work from. It has now been 2 weeks, so I thought we now have had enough time to test out the changes. By making these polls I hope it will easier for us to show what we think of the Friendship Refresh and allow PerBlue being more…