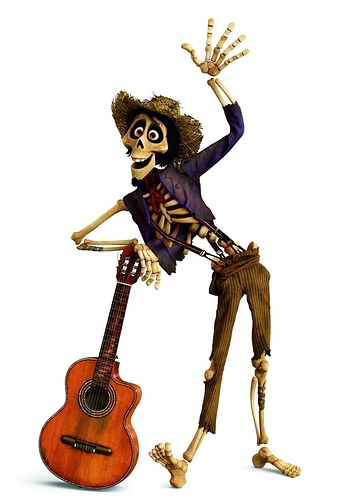 “That…was a lie. I apologize for that.”

Entrance:he comes in with his guitar in his hands

Defeat:he sits down and frowns

White:hold you in my heart

Passive:marigolds trail behind all enemies at the start of each wave, instead of a basic attack, héctor strums his guitar which decreases enemies attack power each time he strums

Active:hector plays a chord on his guitar which damages enemies for x amount and blinds them for 7 seconds

Hector flashes a smile at his enemies which charms the closest enemy for 5 seconds.

“Hold you in my heart” now deals more damage to enemies who are already blinded.

Hector’s basic attack now decreases enemies armor when they are blinded by him or any of his allies.

“Mischievous yet charming” now increases the effected enemy’s attack power and speed until the charm wears off.