The horse needs a nerf prime example is attached

Ian fits control well actually I think, he just does a bit too much damage maybe…

Meanwhile Cheshire is just broken. Can’t tell whether he actually works as a control as enemies he supposedly saps and stuns are already dead by then.

Basil, as Jumba too, I think should be damage characters, as long with Basil having some fixes to work better

Oh so… Mulan.
But instead of slow, she does something better, stuns.

She only stuns once, and her knockback is exclusive to her Colette disk. What makes her a damage role hero is her increased Normal Crit on shields…

Jumba’s and Cheshire’s purple skills wants to talk about life with you.

Speaking of controls that should be damage, Powerline is one which is kinda between… he does blind, but only to deal more damage. But he also has a long freeze…

Which is exactly why they should be damage… not Ian…

Hades
Olaf
Sally
Judy
They need revive to be removed

They need revive to be removed

Why? Judy is weak. Her revive does not make her good. And with revives you can still defeat them.

He needs a buff more than anything

Maximus is fairly OP, but as many others in this thread have noted, he’s not unbeatable. I’m sure it’s still possible to send a 500k team against a 100k Moana and lose; does that mean she needs to be nerfed?

How about use precise heroes like jumba, robin and mr incredible? Or lock, shock and barrel?

They help, but there’s no guarantee they’ll attack Cheshire before he does his head toss (bye-bye, one hero) or his headstand (bye-bye, three or four more heroes). I’m not convinced Cheshire needs a drastic nerf, but he definitely needs some tweaking at least: lower his evasion, reality negation, and damage a little, or two of them a good bit, and he should be OP but not arguably game-breaking.

She can be a good support, especially with her red skill. Not OP by any means, but situationally useful at least. But yeah, her revive is definitely one of her more minor skills.

No, but a lot of heroes still are.

He needs a buff more than anything

Why? Judy is weak. Her revive does not make her good. And with revives you can still defeat them.

They wasted fight time for no reason. Especially Hades
Idk what the idea of making heroes revive just for wasting time

I don’t think you faced full red skilled hatter yet

Mostly he last one die

The length of his debuff immunity is very short. It’d better if it were longer.

Control role always seems to be where the hugely OP damage numbers come out.

There’s also Colette, and Powerline when he came out who was incredibly powerful.

Control role always seems to be where the hugely OP damage numbers come out.

There’s also Colette, and Powerline when he came out who was incredibly powerful.

The game is heavy CC and then there´s Cheshire who is incredibly anti-CC.

Just an example of neverending circle. The stats will just get more beasty without a fair choice.

every time they nerf a hero it makes them trash, complete trash. nerf=death. let’s not rally around saying nerf and then get mad when a hero is unusable. cough Bo Peep cough

Bo Peep was a bug fix. Randall and jafar were also nerfed, and they were still good for a while after that.

Maximus is op yes you can take him down but he is destroying war along with Cheshire Cat. I’ve taken every arena team on server 21 (noted above) with a 100k power gap and i do not use max or Cheshire. I must tell you it’s not pleasant but I’ve done it and chances are it starts with kristoff. Example of a successful war attack from one of my guild members (I’m not upset because it was in our favor) For those that stated the other teams were bad examples. This should prove that max is out of control. Yes they used a good set of toons in that attack but come on 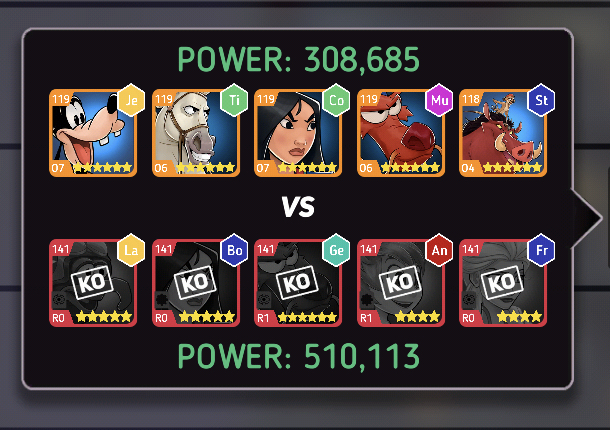