The one eyed Scottish cyclops 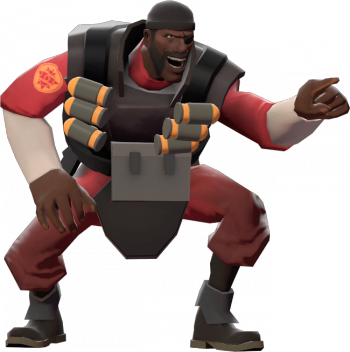 Basic Attack: Shoots a grenade that hits the farthest enemy that does X damage
Entrance:An Explosion blows up to the left side of the screen as Demoman lands into position.
Victory:Cheers while holding a box of beer.
Defeat:A grenade falls out of his gun and blows him off the screen.

White Skill:Have at them lads!
Demoman pulls out his shield and sword and charges through the enemy team and after he has hit every opponent he slashed the last enemy he hit with his sword. Both the shield and the sword do X damage
Green Skill:Sticky Trap
When Demoman enters the wave he sets down three sticky traps that do initial X damage but do an additional X damage if they are left there for 2 seconds. There will be an icon next to Demomans icon that displays how many Sticky’s there are. When the player taps them the traps will explode from the first to the third. Demoman also sets a new trap every 7 seconds. Each trap does X damage up to a maximum of 6 traps.
Blue Skill:Dynamite
Demoman throws a piece of dynamite into the middle of the fray. It explodes after 4 seconds and does X damage from the initial blast and X damage overtime.
Purple:Scotland’s finest
Demoman cannot be disables in any way and instead absorbes them and turns them into X damage from his basic attack.
Red Skill will be made later still need time to think of one.
Friendships
Soldier
Pals no matter what.
Demoman now is able to set 9 traps and they all now deal X more damage and take less time to be launched.

Who do you want next? I only have four left to go!