Can you explain to me how to assign wars? It is the third consecutive war with guilds in the top 5 and in the legendary league when we are in silver. I think your “algorithm” needs to improve, it is a shame the facilities you give to the top 5 guilds to win wars and how little our opinions matter to you…

Take the loss on the chin, its a good way to test your teams vs strong opponents

And give more rewards to those guilds, very fair lol

It’s a sad misfortune of the war matchmaking system that guilds ranked in those positions basically get the worst possible draw, it’s been a problem since the matchmaking algorithm was last updated forever ago and nothing has been done

It’s because the system can match you against guilds ± 13 ranks - so while as (eg) a rank 6 guild you could in theory be matched between rank 1 and rank 19 - for the guilds ranked above you, they are guaranteed to match your guild. So this imbalance occurrs

My guild is ranked 7 in power yet we reach Legendary less than 1/3 of the time because of the endless wars vs. stronger guilds.

We are in rank 10 of power and we are constantly faced with the top 5, our members have 3 or 4M of power and our rivals 10M… absurd wars with 0 probability of winning.
The usual in perblue to harm the same guilds always and ignore our opinions or respond with a copy and paste message.

I know that feeling well; my guild was ranked 10th ± 1 for about 4 months before the server merger, and every month we would finish with 6 wins and 9 losses because of how often we faced the top 5 guilds. One month 13 of our matches were against guilds in the top 9 (nine of those matches were against the top 5), and one of the other two matches was against the guild one rank below us. (Yes, we still went 6-9 that month.)

If PerBlue hasn’t done anything about the problem after all this time, though, I doubt they ever will.

Unfortunately the issue is they need to rotate those top guilds into the equation. They can’t face each other every time. Sadly with all the players quitting over the past months we’ve jumped up to 8th and are also experiencing the issue. The only way around it that I can see is lowering your MMR. the question I have is how is it actually calculated to begin with?

If they beat a team that is stronger it’s because they understand what it means to put together an offense to work together and get it done.

I think the simplest way to make it possible, if not always easy, for guilds ranked 6-12 to reach Legendary is to make it so that guilds that have reached Legendary rank only play against other Legendary guilds (save for one match when there’s an odd number of Legendary guilds). The top 5 guilds will reach Legendary fairly quickly, allowing other guilds more chances against more evenly-matched guilds. That does mean there will be some wildly imbalanced matches within Legendary, but hey, they’ve reached Legendary, what should they care?

The only way around it that I can see is lowering your MMR. the question I have is how is it actually calculated to begin with?

I don’t know the exact formula for calculating MMR, but I do remember the only way to significantly lower it is to lose to a guild with a significantly lower MMR. Unfortunately, guilds trapped in the 6-10 rank face very few opponents with lower MMR; they would probably have to throw every war match for months in order to lower their MMR enough to get better matches.

I agree about legendary on legendary. It would be interesting as the top two legendary guilds currently on survey 21 are the no.1 ranked guild and no.485 ranked guild but since they wiped us clean I guess it wouldn’t matter what rank they were.
War needs an overhaul. It’s not worth the effort and is somewhat boring. I used to enjoy staging the battles and seeing my plan come to fruition but at this point it’s to redundant and the rewards are not very good.

We are the rank 21 guild on s22 and were matched up against the rank 4 guild last war, and now have been matched against the rank 5 guild…what is happening?? You can’t even blame it on MMR, as both are way ahead of us. Not very fun and kind of rediculous to give us two automatic losses like that versus guilds with literally TWICE our overall power.

the differences of power on S2 are around the same - doesn’t say much good for how unbalanced the power distribution is that from rank 1 to 7 power is halved, but to halve it again you’ve got to go down to rank 24 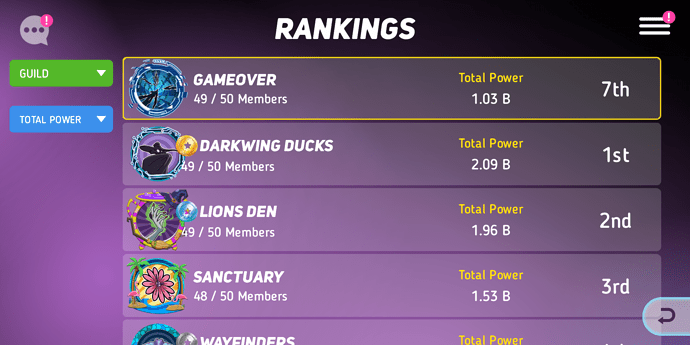 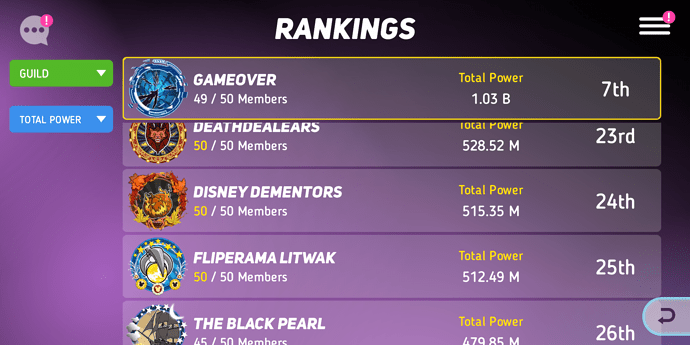 And now we get the #6 guild, are you kidding? @Polaris this is quite problematic…why make our guild automatically lose not one, or two, but THREE wars in a ROW. Kind of annoying that we’re completely taken out of a game mode for an entire week. Screenshot_20201021-120107_Disney Heroes|690x335