How long do they usually take?

They are doing it

How long do they usually take?

See what I made bold. There is no app update.

Take down servers 30 minutes before end of contest. Are you serious PB?!? And you wonder why players are leaving.

I believe the server update today is only for the prize wall, the Patch Notes 3.3.01 update is scheduled for next week:

This is a full app and server update that is currently planned for Tuesday, August 24, 2021

Exactly my thoughts as well. I was grinding for a better rank in the contest. Hope it comes back up soon

Yall go update your game, And make sure theres no bugs just let the creator know.

How about just change the inventory back to what it used to be instead of making changes nobody asked for?

How about just change the inventory back to what it used to be instead of making changes nobody asked for?

Shame its a massive let down and rip off again shame on you!!!

Tbh I wouldn´t say that in reply to Polaris. Besides, I called Prize Wall “Wish Crates but pink” and knew I won´t be wrong. It´s a rather lame thing, the rewards are… meh at best and the only real prize are 20 Lilo Chips and Badge Crate (also it´s just one

The rest of the rewards may as well not be there and it would be the same. XP Drinks are too low, if it were 10 (for one level of a character at 255), if the amount of crates was like 50 at least… I would maybe change my opinion.

Gold should not be there at all. I can earn 200M daily on Surge, yet the other modes give me 800k per token? Hello? I just don´t understand where there is a balance in this game. Wait. There isn´t. It is thrown out of the window with each successing release of a character.

@Polaris how long will the update be I haven’t been able to play for 2 days when will it be done if you know?

This is a full app and server update that is currently planned for Tuesday, August 24, 2021

Are you able to send this one to Amazon earlier, assuming the code and testing is done, seeing how it’s now over 2 days without them approving it?

Try using the double coins item the one that is having 24 hours duration it will put another icon on the screen which makes it over lap the other buttons, the button I’m unable to click is the new box button with random items and grand prize, i know because i was able to click that box earlier but when i used the double coins item the buttons messed up.

You can still get to it through the Events button in the bottom-right corner (the one that looks like a calendar). Tap it, then tap Lilo’s Prize Wall on the left side of the screen, then the Let’s Go! button near the bottom right. 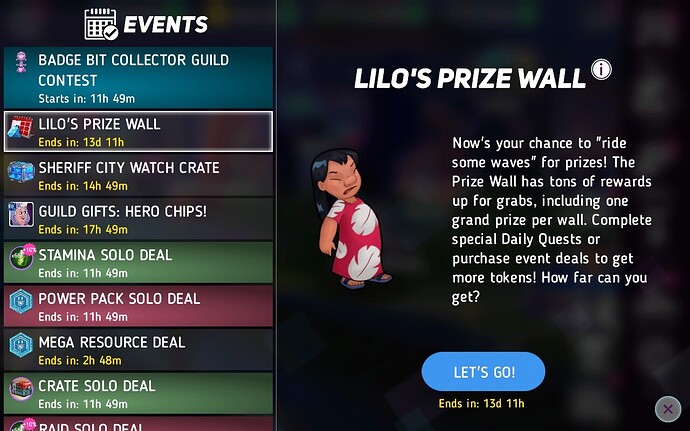 Thanks a lot, im now able to redeem the boxes

Don’t expect that every week PerBlue have to release big updates, sometimes they just have to make bug fixes
surely in a couple of weeks they will get an update with some new hero

@Polaris does the bug fix for Facilier fix crashes in heist as well?

Hopefully you will do some patching before Tuesday. My family cannot play Due to patch.