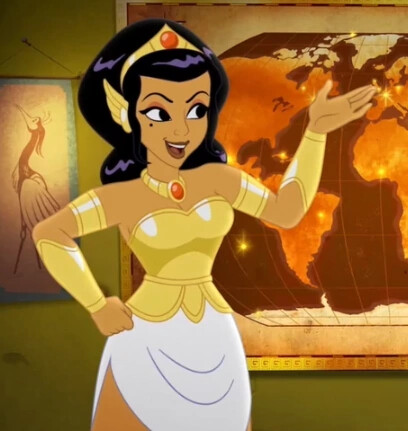 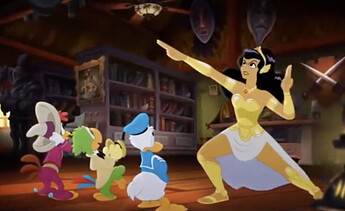 image1082×664 116 KB
Defeat: The Atlas is closed, trapping Xandra
Basic Attack: Punches nearby enemies
Description: The goddess of adventure is here to destroy the enemy lines while motivating her allies.
Quote: “Any last words before I send you to Hades?” 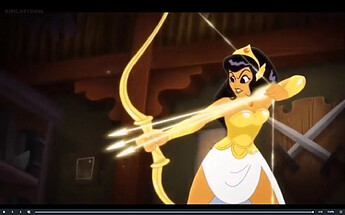 image1680×1050 180 KB
Passive: Every Time Xandra or their allies activate one of their skills, they gain one stack of “Adventure”. Each stack of adventure grants X Basic Damage and more 5% attack speed.

Active: Xandra shots three shining arrows at the backmost enemies, dealing X damage per arrow. If there are stacks of adventure on your side of the field, you can choose one of these effects to be activated. If on auto, the one that corresponds to the number of stacks at the moment will be activated, except for the last one, which will be activated even if the number exceeds. 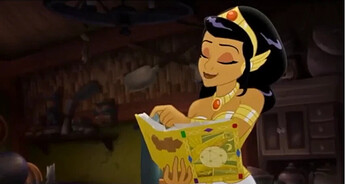 image854×457 55.6 KB
When Xandra is K.Oed, the Magic Atlas will replace her. The Magic Atlas has X HP and redirects 30% of the damage done to allies to itself. When the Magic Atlas’ HP goes to 0, it opens, releasing Xandra and healing her for Y HP. When Xandra is revived, she grants to all allies and herself one Stack of adventure. This can only happen once per wave.

: Divine Entrance
Every time Xandra is released from the Magic Atlas(Her entrance and revive), she grants to herself and all her allies X skill power and 250 energy.

: Adventurous Spirit
Every time Xandra grants to herself or her allies a stack of adventure, she gains 50 energy.
The energy gain is reduced if Xandra is above level X.

: Goddess of Adventure
Now, The Magic Atlas will also grant reflect to itself for 8 seconds, and everytime Xandra is released from it she will be Invincible for 10 seconds and gain +50% attack and movement speed for 10 seconds as well.

The reflect might fail if Xandra is above level W.
Other stat boosts:
+X Skill Power
+Y Basic Damage
+Z Basic Damage granted by each stack of Adventure

Xandra and Hercules
Campaign: The Twelve Works of Xandra: Xandra asks Hercules how to make her name known for millenia. So, they go on an epic quest to make that happen.
Allies: Merida, Moana and José Carioca
Disk Name: The Creep of Nemea
Effects: +X Armor and Reaility per Stack of Adventure
Now, when Xandra uses “Divine Arrows”, she gets Invincible for 6 seconds(+2 per star)

Xandra and Minnie Mouse
Campaign: The duality of a goddess: Even tough Xandra loves her divine duties, she wants to know how to act like a normal girl. So, she goes to Minnie for advice.
Allies: Vanellope, Elsa and Jasmine.
Disk Name: “Just Be Yourself, Sweetie”
Effects: + X Tenacity and Fantastic Crit
Now, “Divine Entrance” will also Charm the enemy with the most basic attack for 6 seconds(+1 per star)