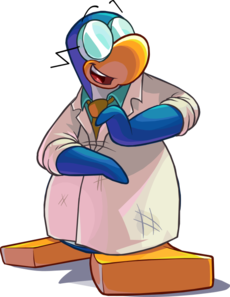 The inventor from Club Penguin Island, Gary deals great damage with a variety of inventions.

Role: Damage
Position: Front
Trial Team: Blue
Entrance: Uses the Ghoul Detector 3000 to walk into position, then he puts it away and pulls out the Snow Launcher.
Victory: Jumps and Cheers, like Basil
Defeat: Snow Launcher explodes and he gets covered in snow
Attack: Launches a snowball from the launcher

Allies are healed X HP and gain 70 tenacity and evasion when given pizza.

Enemies are dealt X damage and their attack and movement speed are reduced by 50%.

Green Skill: Electronic Magnetism (Fantastic Damage)
Gary activates the Electromagnet 2000 and uses it at the back most enemy. This will deal X damage to the target and enemies that touch them and pull the to the frontline. This deactivates all shields and stuns enemies for 10 seconds if they were shielded.

Stunning shielded enemies has a chance to fail against enemies above level X.

The study has a chance to fail against enemies above level X.

Allies healed by “Pizzatron 3000” are energized for 7 seconds.

Granting “Energized” has a chance to fail against enemies above level X.