DHBM’s third anniversary is just around the corner, so I’d like to see what your hopes and expectations for the anniversary update are. As for me…

I believe they have only done this ONCE. This might be a lot of work for the team.

The addition of either Star Wars Or Marvel characters

Polaris has already confirmed that they are focusing on Disney and Pixar characters atm.

For this to work, PB would either have to add a boatload of new characters in at once so that all trials have around the same amount of characters or almost all upcoming characters from here on out would have to only be these 3 new colors. Not to mention what this would do the the Invasion team & rewards rotation each week.

They will probably add some Classic Disney character(The other Caballeros, please)

I think there have only been two updates that have had 5 or more characters, and that was all the way back in beta: 3 years ago

The addition of either Star Wars Or Marvel characters

As others and PerBlue has stated before: Star Wars and Marvel are off the table

They’re never gonna release costumes again. Doesn’t matter whether a special event will be coming up or not.

A new mode for the fountain

That would be the Wish Crate

These predictions don’t make a lot of sense. Next time, look at previous anniversary updates and then make your prediction.

That wouldn’t make sense because only 3 colors are in the game to represents some 3 movie franchises (zootopia: Yellow, The Incredibles: Red, and wreck it Ralph: Blue)

and that was all the way back in beta:

No, it happened after the global launch in September.

That would be the Wish Crate

… it makes (some) sense, for each anniversary so far were we getting number of heroes matching to the year.
But then let’s not forget that Kim was supposed to be included in 1st Anniversary so it would make “always 2”.

As far for heroes themselves, there are really nice and long-awaited ones

So excited to finally see them!

I expect another princess and a special princess invasion next week.

Did they give out like goofy and or Mickey for free for anniversaries maybe?

What princesses are we missing? Maybe we will get snow white or Tatiana?

What princesses are we missing? 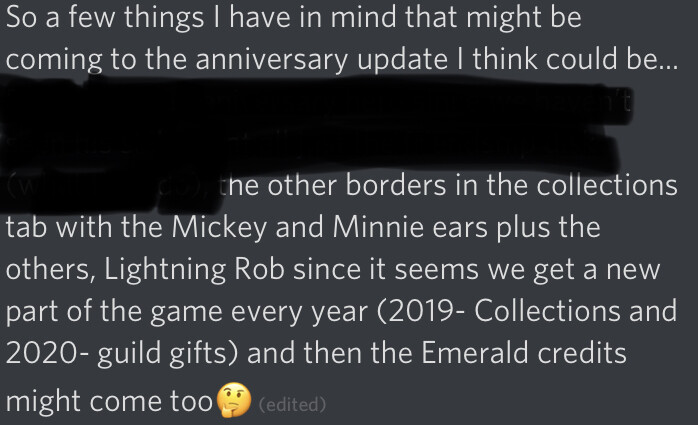 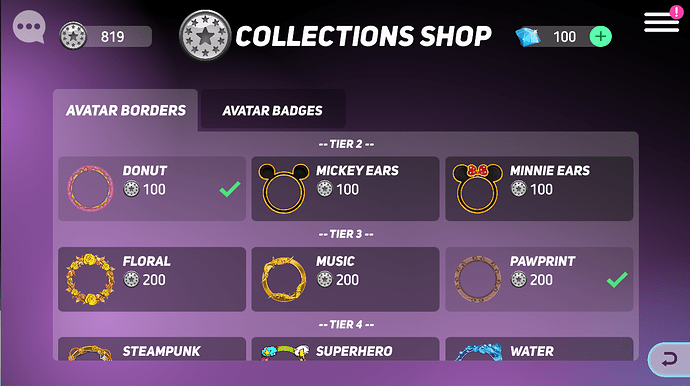 Where did you get these images? Because I do not think you can see those things yet.

Where did you get these images? Because I do not think you can see those things yet.

Patch notes 1.10 and they appear as cameo in collections page.

I sincerely hope those borders manage to make the cut. They´re really missing for the surplus tokens most have.