A regular fish out of water (Ariel remastered character concept) 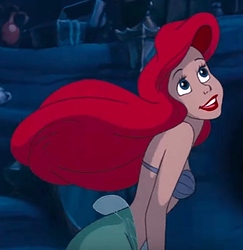 Description: Ariel sings her song to help her team as waves splash at the enemies.

Appearance: Ariel will be in her mermaid form. Her appearance will be similar to Gerald, Marlin, & Nemo’s. She will have her own rock and water source.

Basic Attack: Ariel throws a thingamabob at the enemies.

Entrance: Her water source and the rock glitched to appearance as Ariel comes out of the water.

Victory: Ariel combs her hair with a fork.

White Skill: Singing Along
Ariel sings to heal all her allies X HP and charming the closest enemy for X seconds.

Blue Skill: Ocean Opera
Ariel brings in Sebastian so Sebastian can conduct his song. This grants Ariel X reality and X skill power and will silence all enemies for X seconds.

Purple Skill: Part Of The World
Enemies damaged by “Wave Splash” will also decrease their attack speed and basic damage by X% for X seconds.

Red Skill: Collection Finds
Every time Ariel charms an enemy, she gains X Max HP. And enemies charmed by Ariel will lose X armor and X Max HP till their charm duration is over.

Reworked Concepts: I reworked a few of my old concepts like adding skill pics, red skills, updating friendship discs, and more. Check them out by tapping/clicking on their images:

Any feedback? I hope you liked it!

Percentages, seconds, and energy amounts shouldn’t be showed by X. X is meant to represent a number that changes as the skill is leveled up. Not bad though.

Um… they are just reworked concepts… of course characters like Naruto and Garfield have 0% chance to come.