A Rework for Mike Wazowski - From Damage to Support

If you have ever watched Monsters Inc and Monsters University, you know that Mike Wazowski is great at supporting people: creating strategies for Scare or helping the Oozma Kappa members to find their own talent. Even though Monsters Inc finished with him being the “star of the show”, I still think that he would be better as a support character, because supports can also shine! Feel free to leave any feedback! 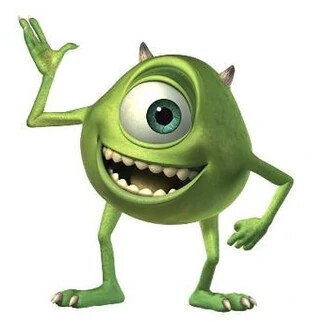 Mike Wazowski is a 3 Stars Backline Support Hero whose trial team is Yellow.
“You and I are a team. Nothing is more important than our friendship.”
Formely a Scare Assistant and now a Comedian, Mike Wazowski will use his knowledge and talent to bring the best of his allies!

Scare Strategy
Mike Wazowski creates a Scare strategy, applying “Tactician” to all allies and himself for 10 seconds. “Tactician” grants X Basic Damage and makes the allies that have it deal Fantastic Damage with their Basic Attacks.

Have a Good Laughter!
Mike tells a good joke to his allies, granting “Energized” to all allies and himself. Allies energized by Mike gain 75 energy when they hit an enemy with their basic attacks.
The energy gain is reduced in allies above level Z.

Talent Revealing
When an ally reaches 25% of their Max HP, Mike Wazowski heals them for X HP and applies “Talented” to that ally. Talented allies gain X Skill Power, Have their basic attacks boosted by Skill Power as well and Scare enemies with their Basic Attacks. “Talented” cannot be blocked by “Fatigue”, and Mike can only use this skill once per Ally.

My Own Talent
Allies that are either “Tactician”, “Energized” or “Talented” by Mike gain X Skill Power and deal double damage to Scared enemies.

Master of Scare
Whenever Mike or an Ally deal a critical hit, they gain 1 Stack of Hardy and 50 Reality Negation. Mike and his allies gain X Armor and Reality everytime they receive a buff(This doesn’t count as a buff).

Note: I won’t be changing much from the friendships, mostly disk effects and names.

Mike Wazowski + Jack Jack
Campaign: Origin of a Myth: Mike, after seeing Jack Jack travelling through dimensions, decides to investigate Jack Jack’s link with the myth that children are dangerous. He doesn’t find anything at the start, since Jack-Jack is, you know, a baby.
Allies: Elastigirl, Basil, Randall Boggs
Disk Name: Mythbusters
Effects: +X Reality to all allies and himself.
Stars: Scare Strategy now also applies “Researched” to all enemies for 4(+2 Per Star) seconds. If a Researched enemy is either Scared or Studied, there is a 100% chance of dealing a Super Crit in them with the respective types of damage.

What do you think about this Rework?

Also, do you guys think I should make more reworks?