A spy in our mist (renewed) 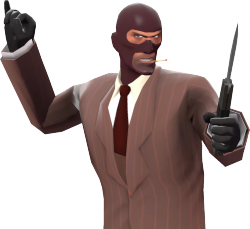 Victory:he straightens his suit and tie as he grins

Defeat:he falls onto his back as be drops his knife

Passive:at the start of every round, spy will become invisible for 7 seconds which makes his untargetable until the invisibility wears off

Active:spy uses his disguise kit to steal a opponent’s look that the player chooses until he uses his blue skill.

Spy dodges a close ranged attack and fences the opponent who tried to attack him, dealing x damage.

Spy turns invisible for a little bit and after 3 seconds he appears behind the opponent who spy disguised as and backstabs that enemy, takes a huge chunk of damage from the enemy and steals x energy as well.

When spy is disguised, he will gain a shield for x amount which also increases spy’s attack power when the shield gets damaged or destroyed

When disguised, spy now heals overtime for 8 seconds each wave

That spy is not one of us