This concept was requested by @AgentJake. Sorry for Procrastinating on this. 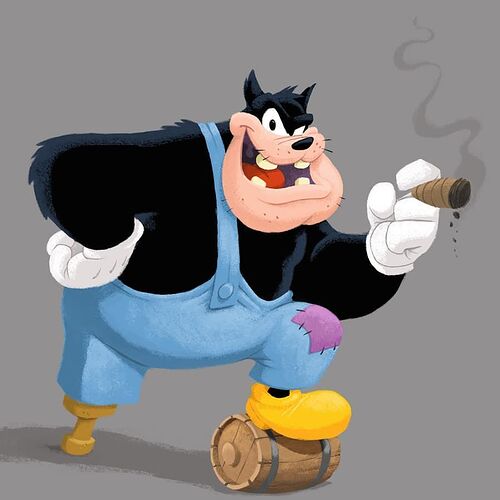 “I’m gonna knock you into next week!”

Pete is a hefty bully who’s been causing crime and been dealing with Mickey Mouse for as long as him. He uses his brute strength to punish enemies around him.

Role: Tank
Position: Front
Trial Team: Red
Entrance: Stuts into the battlefield, then cracks his knuckles
Victory: Laughs and rubs his belly
Defeat: Tries to blow a pipe but it blows up in his face
Attack: Punches an enemy

White Skill: Knock Out (Fantastic Damage)
Pete winds up and punches the closest enemy, dealing Y damage knocking them back, and dealing the same amount of damage to enemies that they land on. Scared enemies damaged by this are stunned for 7 seconds and are applied 2 stacks of “Fatigue”.

Green Skill: Toxic Fumes (Fantastic Damage)
Pete smokes some of his cigar, increasing his reality by Z. Fumes then travel across the screen, dealing X damage per second to enemies and blinding enemies for 5 seconds. This lasts 5 seconds longer on Scared enemies.

Blue Skill: Insult to Injury
At the beginning of each wave, Pete laughs at the enemy with the least HP, decreasing their basic damage by X and slowing their attack speed by 35%, and scaring all other enemies for 10 seconds.

The slow is less effective on enemies above level Z.

Purple Skill: Big and Bad
Pete gains Z basic damage whenever an enemy is scared. Pete retains 50% of this buff when carried from wave to wave.

Red Skill: Take The Loot
When an enemy is scared, Pete takes 2 of their active buffs. When a scared enemy is KO’d, Pete gains 50% of their basic damage and all of their energy.

Peter scares enemies for 5 seconds when he damages them with his basic attack. If they are disabled, Pete deals 300% more damage to them.

The damage increase is less effective against enemies above level Z.

Pete-John Silver
Metal Pegs
Attack Speed on Stun
+Z Basic Damage
+Z Reality when an enemy is stunned
• Whenever an enemy is stunned, Pete’s attack speed is increased by 5% (+5 per star level) for the rest of the wave, stacking each time.

So…this has been in my concept folder for…4 months probably???

Yeah, I haven’t been up to my concept schedule anymore.

Maybe cuz of school and what not.

I’ll get to my requests ASAP before anyone gets annoyed at me.

(This isn’t a wiki, this is a list of what requests I have left)

Got other concepts planned as well. See ya!