I really think that they should add Go-go chips to Gold and/or Diamond crate that way it would be easier to unlock Go-go because not all of the players can make it to challenger in arena and Collisieum. If GO-GO chips where available in either of these crates then there would be a little hope for the not so powerful players to unlock Go-go. Also the very powerful players are showing off there Go-go hero to the other players and rubbing it in the other players faces that they do not have Go-go. This make players feel like as if they will never get Go-Go. So please add her chips to Gold or Diamond crates (please don’t add to VIP crates).

They didn’t do this for Jumba or Silver, so they’re not going to do it for Go Go.

Well I got John Silver from a diamond crate. And I got some Jumba chips from the gold crate. So they are in those two crates.

they may do it… You never know

Also the both are in the diamond crate

Because they’re not exclusive anymore. Before Go Go’s release, Silver was ONLY available in Challengers. And Jumba before him.

This is part of the normal hero releases and each character rotates to different game modes.
You can refer here for the current list of event exclusive heroes and how long they were in the rotation:

All three previous Challenger reward heroes rotated off after a certain time:

Gogo replaced John Silver and will be the Challenger rewards for a few more months.

It is just part of the game, certain characters are exclusive to top players / people who pay money.

OK now I understand. We’ll at least I’m close to becoming challenger in arena. I’m plantanium 8 in it…I couldn’t keep my place as 5

Yeah, she is quite good.
But based on the pattern she will be Challenger reward-exclusive for at least another four months.

Well, it doesn’t hurt to hope that it will happen.

Now I added a poll

I don’t know how to make polls that good

Well, I assume something needs to be done: 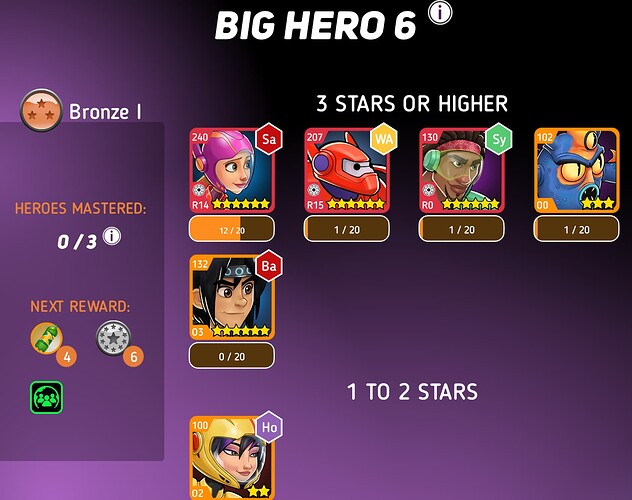 Big Hero 6 finally got their collection and Gogo doesn’t get to play!
She will need a lot more chips to go all the way to 6stars.