Hello guys, i’m Paraflux from S9, Warner Bros guild.
Theese days i came to know about the incredible gap between first servers and last ones: new heroes (Barbossa), higher badges (orange), higher promotions (P4), higher team lvl…
I was already aware of this gap, but i didnt know it was this big.
So this topic is addressed (yea i’m using google translate) to those players from top servers and top rank: which is the best team for the arena? What’s your strategy?
There are many things that will be updated in my server (the list is up here in the topic), so what should be my goals? On which heroes should i focus on? Which hero should i bring up?
Tell me everything!!
Ty and enjoy ur game <3

Server 5 here, we are actually lvl 75, not like S1, but now one of the most common TOP arena team, is Sulley, Tia Dalma, Calhoun, EVE and another tank (or Judy).
If you want to be in the top you have to have Calhoun and Dalma at max for sure, they are really good late game characters

The team that dominated server 3 for a while, and still to some extent is Ralph, wall-e, zurg, tia dalma, judy hopps.

Sry for my inappropriated answer guys.
I apologize if i offended someone, i swear it will never happen again.

Anyway o want to re-ask you the main question of that stupid answer: do you focus on disks on high ranks? If yes, which friendship should i bring up?
Ty and sry again.

My advice, keep on reading the heroes skills description, and make a team that can do skills combo… i think this screenshot should be a proof 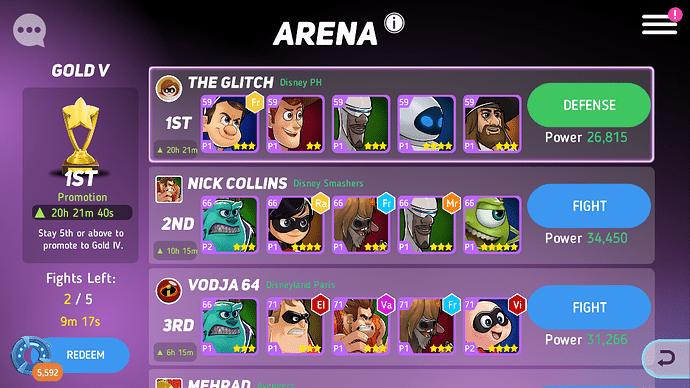 So your advice for a late level team best utilised at max levels when everyone is maxed and 5* is to post a weak beginner team from an account that’s about a week or so old?

For a arena defence team i always recamend something with a base of sully and callahoun. Then i have found out barbossa and jack jack pair amazing together. Then add in a support or a front line damage to protect and/or inspire the team. are many combos you can try. Right now i have my defense team set as sully, quorra, Tia , callahoan, and vanollopy. Then for when you battle you always want to change the team to contuor the enameys team.

1 hero defence is what ours has turned into on 4 because of promotion rate is slow because of all the splits and mergers in arena leagues. You never let people see the team you use because it gives them time to practice or counter. Unless your way stronger then needed for the league your in. Ralph, violet, tia, calhoun and woody is fairly strong
Incredibles team of mr.i elastigirl jack jack violet some use dash some use frozone because of disk
Freezeball scare team is still good at high ranks, sully, frozone, wall-e, mike, zerg or jack jack
Pirates of doom team felix or bogo, judy, sparrow, barbosa, and eve or tia.
Tank and quake which is felix ralph mr.I bogo and frozone however it requires frozone mr idisk to three stars, felix frozone to 2 stars, mr.I dash disk to 2 stars, bogo mr.I disk to 2 stars
Maui howi maui judy calhoun violet and barbosa or elastigirl. you require the judy bogo disk. Violet ralph disk to 3 stars and calhoun violet to 2 stars and if you use elastigirl the vaneloppe disk as high as you can get it on stars