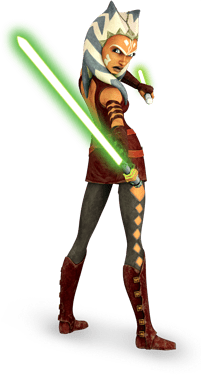 Ahsoka362×675 221 KB
Ahsoka may not be the most experienced Jedi, however, her athletic nature keeps her one step ahead of her enemy.

"Tell you what, I’ll give you a merciful death."‎‎‎‎‎‎

Entrance: Ahsoka runs in with her lightsabers ignited

Victory: Puts her hand on her hip and smiles

Defeat: Reaches her hand out with a distraught expression on her face

Normal Damage
Passive: Ahsoka’s basic attacks target the two closest enemies. If only one enemy remains her basic attacks deal an additional X damage and stun the enemy for 7 seconds.

Active: Ahsoka uses her lightsabers to do a spin dash at the enemy with the most remaining HP dealing X damage. All other enemies between Ahsoka and the target are dealt X damage.

Green Skill: Power of the Force

Fantastic Damage
Ahsoka uses the force to lift up the furthest enemy before slamming them into the ground dealing X damage and stunning them for 11 seconds. Enemies caught in the aftershock have their attack speed reduced by 75% for 4 seconds.

Blue Skill: Ahsoka’s Shoto
Once per wave when Ahsoka falls below 50% of her Max HP she swaps out once of her lightsabers for a smaller, yellow, shoto lightsaber. This heals her for X HP and increases her Max HP by 25%.
While using her shoto, Ahsoka gains X basic damage and 125% attack and movement speed.

Red Skill: Jedi Reflexes
Whenever Ahsoka is healed by any source her attack and movement speed is increased by 15% for the rest of the wave.
The speed boost is less effective when the source of the heal is above level X.
+X Damage dealt by Power of the Force
+X Skill Power
+X Reality

Ahsoka and Merida
Faster at the start of wave