This is it. The last concept of mine for 2019. The year is coming to an end. The year was short… for me at least. I had plenty of fun here on the forums, the game, etc. So, to say goodbye to 2019, I decided to make a concept of the Fates, from Hercules. They are very underrated, but they got a thing called, what was it again? Ahh… potential. 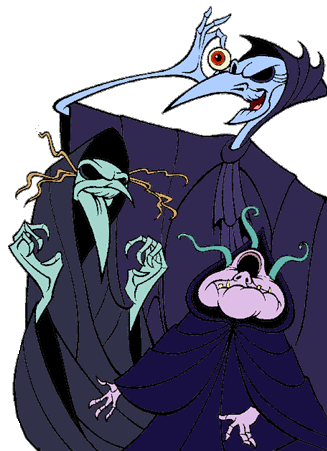 The Fates are a mid-line support trio

Entrance: The Fates walk into the battlefield

K.O.: Their eyeball appears behind them, sucking the Fates into it. Then, the eye disappears

Basic Attack: One of the Fates take out their scissors and snaps it, dealing X damage to an enemy

White Skill: Life on the Line

True Damage
When an enemy has less than X HP, one of the Fates take out the string of one of the enemies’ lives and then has it cut by another fate, dealing X damage

If the enemy is invincible, then the Fates, instead, take out a golden string. When they attempt to cut it, all allies are healed for X HP

Green Skill: Planetary Alignment
At the beginning of every wave, the player will chose an ally, applying “Fate” to them. While under the effect of “Fate”, the ally is granted X Max HP, and they will move directly in front of or behind the Fates, depending on their position

If the ally moves in front of the Fates, they gain a shield that deals up to X damage for 7 seconds

If the ally is behind the Fates, that ally gains 25% attack speed for 7 seconds

The ally may only move every 20 seconds

Blue Skill: Sight of the Future
The Fates will take out their eyeball. Then, the eyeball floats up in the air and glows, granting all allies invincibility and 90% attack speed for 5 seconds

These effects may fail against allies above level Z

Purple Skill: Power of Alignment
Whenever an ally is directly in front of or behind the Fates, the ally gains X basic damage and 25% attack speed for 9 seconds

Red Skill: Past, Present, and Future
Any invincible allies are healed for Z HP and are granted 70 energy per second

This effect may fail against allies above level Z

They can make it in

But the fates of their inclusion rely on perblue

But the fates of their inclusion rely on perblue

We can all say that was a bad pun