While it will probably be a signficant amount of time before the American Dragon crew are added, I am curious about which art style they will use. 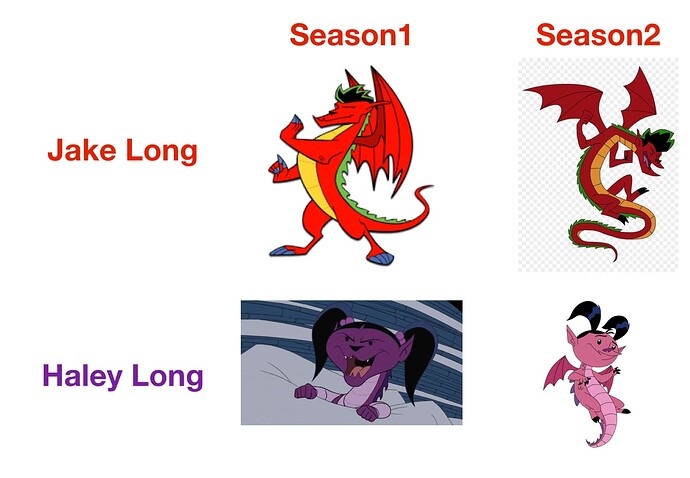 But are PerBlue allowed to choose?
Or will Disney say, you must use the Season 2 art style because it is more recent.

Me personally, I prefer the Season 1 art because it feels more realistic.
Also, Haley is not a stereotypical pink girl in season 1.

it is more recent

Me personally, I prefer the Season 1 art because it feels more realistic.

I like Season 1 more, so if we ever get Jake or Haley, I hope Disney and PerBlue goes with that one.

Season 1 absolutely. I was incredibly disappointed when it changed so drastically. He went from a buff dragon to a scrawny worm.

Although the sister doesn’t look like a dragon in either of those pictures. The first one she looks more like a mongoose and season 2 more pig like.

Unfortunately, as far as I know, we never see Haley go full dragon in Season 1, she only does partial shifting (like head, hands or popping out her wings for flight).
So what her purple dragon form looks like is mostly unknown.

It’s highly unlikely they would give us two dragons from AD, unless they added Dark Dragon.
Jake, Rose, Huntsmaster, they’re the most likely candidates.

There were other secondary characters that got a massive redesign, I literally could not recognize the Oracle Twins, Silva and Bertha in season2.

This is concerning, because they are using the season 2 art:

This is concerning, because they are using the season 2 art:

Yeah, I can’t make sense of that.

One badge uses Season 1 art, the other uses Season 2 art.
Surely they should have decided by now which one they want to use?

i think they have a chance