And now a word from our sponsor (Liquidator Character Concept) 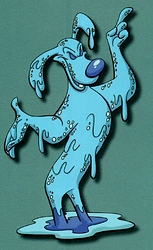 This concept is brought to you by Bud Flood’s Sparkling Crystal Pure Flood Water. Refresh yourself after a long day of fighting creeps.

White Skill: All Washed Up: Liquidator forms a tidal wave and washes across the battlefield, causing X damage and knocking back the frontmost enemies

What type of damage does this deal?

Green Skill: Boiling Point: Liquidator boils himself to the point where if enemies attack him, they get a DOT debuff.

Missing a variable and how long is the Damage Over Time?

Just to clarify, does this heal them or increase their Max HP?

Red Skill: Flash Flood: All washed up increases attack speed by Z for the entire team

I think this can be improved

Please do not take this harshly, this is meant to help you improve

I know, and i’m really trying.

Maybe this can help

Well, Liquidator is blue. So i figure, why not put on the blue team?

Because heroes from the same background are on the same team

Anger is red and he is on yellow team