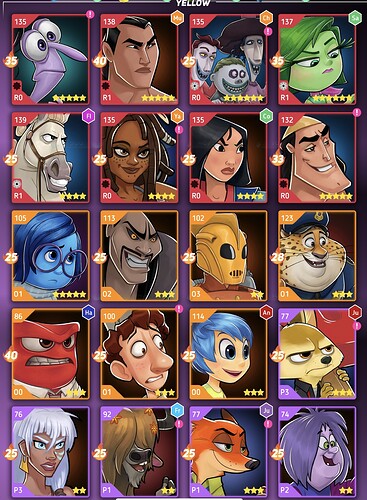 I use Maximus, Mulan, Basil, Li Shang and Animal, works well for me, maybe if you trade Basil for Disgust it would work, but I never really tested this combination, I hope I helped

I don’t use Mim myself, but I’ve heard she is fixed for invasion again.

And for Li shang I would recommend not playing on auto. That way you can choose his red move at the start and speed up your team

For bots, try this:
Maximus (to try to keep mim alive… This doesnt always work)
Mim
Elastigirl (with maxed jj disk to cut through reality)
Stitch (with disk for slowing)
Animal (for speedups)

Obviously, you have to keep Mim alive.

Sometimes, max isn’t good enough. Some people like Davy Jones instead (but he only seems to work in quick fights for some reason).

Against low level bots where I don’t need elastigirl, I might use Randall and Mulan instead of Max and elastigirl. Somehow this often keeps the bots from attacking Mim. And if you need help against the reality of the bots, just use a reality shred.

Running Max, Li (not on auto, for speed) , Disgust, Mulan, and Anger (for speed and white skill).

No one shot kill but it is working. Tried Mim but KO’d quickly. Just not developed enough and not sure how to use.

The thing about Mim is that she deals a flat 25% of the opponent’s hp with her croc bite. So it’s important to use her if you want to kill big bots.

A big part of this is using someone like Stitch to slow the bot to the point where it can’t attack much.

(2) Her “I make the rules” skill should be maxed as much as possible but don’t worry too much if it’s not because the power up flames will quickly take care of that for you.

Don’t even try to think of how much damage other people on the team will do. They don’t matter at all, just Mim.

Thank you. The instructions helped me understand. Now, with the pieces put together and a better understanding I am able to contribute to the guild.

I have already surpassed my previous bests with more than a day still remaining. The battles against the big bots team is Max, Li, Fear (red level but only Max has red skill), along with Mim and Animal (both purple level). The solo battle yellow team is Max, Li, Disgust, Mulan, and Fear.