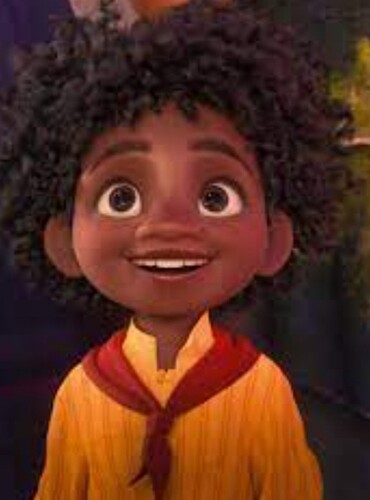 Quote - “I wish you could have a door”

Bio - The youngest Madrigal is looking to enhance the city with his newly earned gift by taking down the creeps plaguing the city. With an army of animals at his command Antonio will be a major threat on the battlefield.

Entrance - Antonio rides in on his Jaguar

Victory - Antonio falls off his Jaguar

Defeat - Antonio and his Jaguar both hang their heads in shame

Basic Attack - A toucan enters the battle on the enemy’s side. It flies through enemies and lands on Antonio. If “Flock of Toucans” is unlocked the Toucan stays nearby. If not, it flies away immediately

White Skill - Jaguar Run (Fantastic Damage)
Antonio, riding his Jaguar, runs through enemies dealing x damage and scaring all enemies hit for 9.5 seconds. Nearby enemies are also delt x damage when Antonio reappears on his side of the battlefield.

Green Skill - Flock of Toucans (Fantastic Damage)
A flock of Toucans flies through enemies dealing x damage and sapping enemies for 12 seconds. Each Toucan Antonio collected during his basic attack also joins the Flock and deal x more damage over time to all enemies for 6 seconds and extend the sap for 2 seconds per Toucan.
The Sap extension has a chance to fail on enemies above level x

Blue Skill - Thieving Coatis
Every 4 seconds Antonio sends a Coati to the closest enemy with a buff. The Coati steals it and duplicates the buff. The buff is applied to Antonio and all his allies. The duration of the buff is increased by 6 seconds
The increased buff duration has a chance to fail on Allies above level x

Red Skill- Birds of a Feather
Anytime an enemy targets Antonio with an attack and he has at least 1 Toucan he saps them for 5 seconds.
2 more Toucans enter the flock when Antonio activates “Flock of Toucans”. These Toucans are counted as Toucans Antonio summons with his basic attack.

Antonio and Timon and Pumbaa
Name - Don’t Eat That