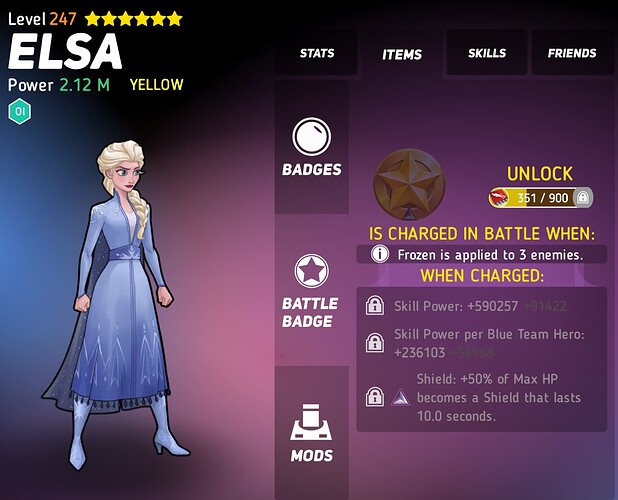 image1648×1333 117 KB
Elsa is the only Yellow I have at the moment and it looks like getting 5 Battle Badges will take a long time. 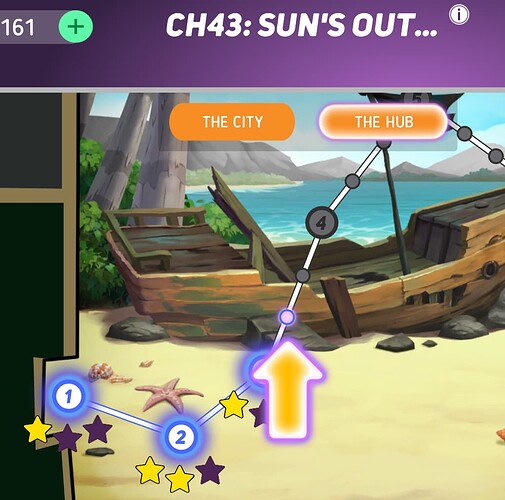 image1036×1025 86.7 KB
I got to the point where enemies are Y1 and I can’t defeat them.
So want confirmation that I should not attempt to play the story mode until I have a full team of Yellows and if they need the Battle Badges to succeed.
Pipsqueak January 13, 2022, 1:50am #2

no, battle badges barely affect gameplay tbh, aside from a few enhancement bonuses that are too expensive to use

it shouldn’t take too long to unlock a few anyway

Clarify the statement expensive to use.

Is there a cost in resources for the battle badge?

Is there a cost in resources for the battle badge?

You need to pay megabits to unlock/level them up and need to pay a huge amount of xp drinks, megabits and gold to enhance them.

yeah, the cost for enhancing more than 1-2 battle badge (to unlock the 3rd bonus) is prohibitively expensive if you also want to level up your heroes.

Fortunately the first one is free

We have to use XP bottles for the badges?
The very same ones we should be using to level up our characters.
That’s an impractical decision and I won’t want to do the upgrades for that reason.

So we only get 1 of the 3 bonuses shown here? 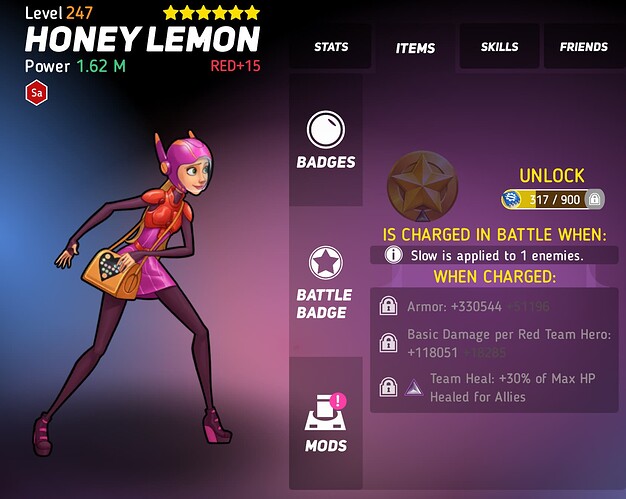 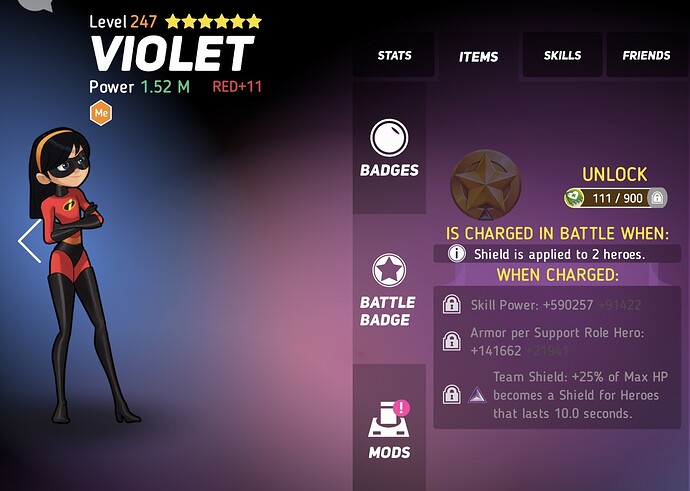 image1863×1327 298 KB
Darn it, I was looking forward to that team heal and shield, but as I have to buy them, apparently I won’t be unlocking them.

You get the first 2 bonuses just by having the battle badge unlocked - the 3rd requires XP bottles (it’s an enormous, ridiculous amount, I can’t even stress enough the absurdity of how much it costs).

I would recommend definitely unlocking the battle badges, but only enhancing 1 of them - you get 1 enhancement for free, so choose wisely. Each time you level up the battle badge with megabits, the enhancement resets, so then you’ll be able to reapply the 1 (or apply it to someone else)

I’ve got like 28 Yellow heroes, all with battle badge unlocked, but have only ever used my free enhancement.

If you do the Codebase daily, you should be able to level up your battle badges to 3-5 without it taking forever & ever

I can not decide which one is the most important. 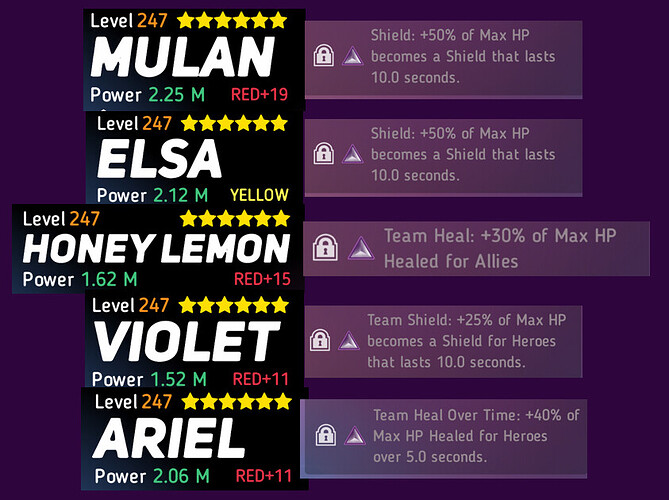 image843×630 137 KB
Honey and Violet’s would be preferred, as they could work in unison to shield and heal at the same time.
But as I can not have both, not sure I want just one.

What do you mean reset?
It changes to something else?

Mulan is one of the very few heroes who benefits directly from being shielded, so hers might be a good option. I’d advise looking also at their trigger conditions though, as one that might trigger many times per battle (or sooner in the battle) will likely be more beneficial than one which triggers more rarely.

You can have more than 1, but as I mentioned it’s hugely expensive.

There are more effective bonuses than those listed - I tend to use my enhancement on Colette, which gives her the ability to become invisible (for some reason

Reset - as in, the same way that badge enhancements are lost when you promote a hero’s rank. The battle badges can be ‘promoted’ with each Yellow rank, which loses the enhancement and thus the 3rd bonus (you get a pittance of the resources spent returned).

Effectively, any time you have 0 BB’s enhanced, you can do one for free. It’s not a permanent decision.

By promote, do you mean when the playable character goes from Y0 to Y1, they lose the 3rd bonus and it has to be applied again?

I am not interested in characters other then what I have shown here, so whatever bonuses they may have isn’t relevant if they’re not amongst my top 5 or 10 (maybe 20-22).
Mostly because they’re so far from Y0 that they’ll never get there, not with the limited amount of stamina I have (which is always not enough).

when the playable character goes from Y0 to Y1, they lose the 3rd bonus and it has to be applied again?

not automatically, no - the enhancement and BB level are kept, but it gives you the opportunity to promote the battle badge too. It’s just capped by hero rank - so at Y0 the max BB level is 1, Y1 it’s 2, etc. Beyond BB level 4-5 it starts using so many megabits that it takes an age to even level up 1, so I wouldn’t worry too much about it

So the badge promotion is independent of the level of the character?
If I just leave the badge at BB1, I’ll always have the bonus?

yep! You will want to level them up whenever possible, though - there’s no reason not to since the 1 enhancement is always free (if it’s the only one)

It’s mostly the XP bottles I object to spending, especially if it consumes a lot of them.

I can not decide which one is the most important.

Best BB are those which give armor/reality negation, tenacity, evasion, normal or fantastic crit, crit damage and hardy. (of course if that will make the stat work)

Heals are nice, if you are willing to pay for the drinks.

a lot of drinks…

Kim, Ron, DW, Shank, and Timon has one of the best BB.
Joy is the only one with totally useless BB and doesn’t even need to be unlocked.

That number of bottles is so unrealistic, I think I will have to accept the harsh fact I can never have more then one 3rd bonus unlocked.

This is how many I have right now and it’s nowhere near the 70k per badge required.

So the question now is, whom do I choose?
I am considering Violet, since my biggest problem is damage mitigation and I’d rather have the team shields destroyed then the health bars of my team.

Honey Lemon is my second option.

Given that Mulan is always in the front position and gets attacked primarily, she is also a candidate for damage mitigation porpoises. 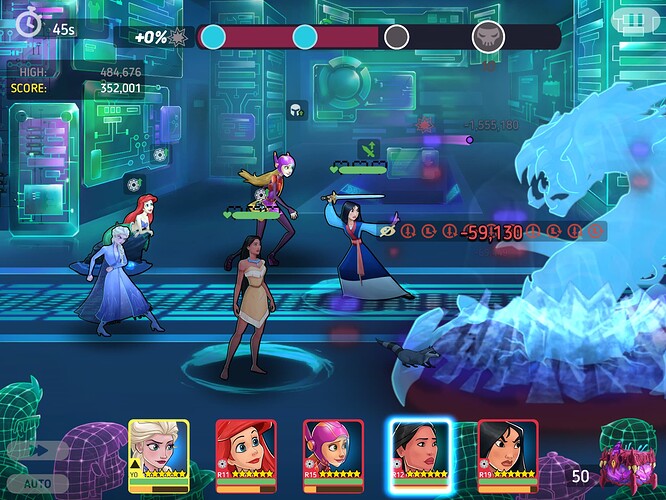 Ariel is my fourth option.

Ideally, I would give Battle Badges to all the candidates and Elsa too, but that is just not possible.

As I mentioned, it’s not a permanent decision - as soon as you promote that hero to Y2, you’ll be able to promote their Battle Badge (with enough Megabits) and pick your free enhancement again

But I can still only have one, so if I chose Honey Lemon first and decided Violet was better, then it would be a transfer?