Now that Snow White has been confirmed, the only princesses we need are Cinderella, Tiana, and… Aurora!! Since I already have Cinderella and Tiana concepts, here’s a Sleeping Beauty one, enjoy it! 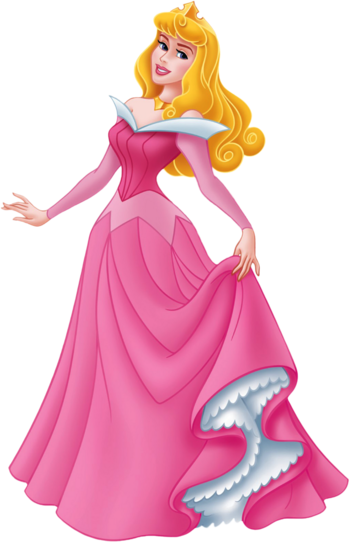 Quote: “Aunt Flora, Fauna, and Merryweather. They never want me to meet anyone. But you know something? I fooled them. I have met someone.”
Beautiful and kind, Princess Aurora graces the battlefield with her loving heart. But enemies, don’t take the Sleeping Beauty for granted!

Basic attack: Aurora pulls various objects out of her basket

White skill: Sleeping Beauty
Aurora falls asleep for 10 seconds, healing for x hp for every second. When she wakes, she has a Shield that lasts for 12 seconds.

Green skill: Gift Of Song
When an ally falls be x hp, Aurora sings a melody, healing them for x hp and adding 3 stacks of Perseverance.

Blue skill: Wardrobe Change
When an enemy gets into melee range of Aurora, her dress changes to blue, then back to pink. This Blinds the enemy and provides Aurora a Shield for x seconds. Aurora can only use this once per wave.

Purple skill: Grace And Love
When Aurora wakes up from using Sleeping Beauty, she Cleanses her entire team and heals her two allies with the lowest hp.

Red skill: Once Upon A Dream
When an ally is KO’d, Aurora heals them and diverts x% of the damage the enemy who KO’d that ally back to the enemy, and grants the ally a Shield that lasts the rest of the wave. Aurora can use this once per wave

Royal Treatment
Ever since arriving in the City, Aurora has felt very… confused. She stumbles into someone who seems to have the same problem: a young woman called Snow White. As Aurora and Snow get to know each other, it turns out the two have a lot in common, like their problem with not trying to be killed by women who need serious therapy. So, Aurora and Snow decide to make their very own Princess Trauma Support Group, where pressured young women discuss their lives and how to prevent it for others.
Partner: Snow White
Allies: Ariel, Rapunzel, Raya
Disc power: When Aurora uses her red skill, she steals x% of the attacked enemies Energy

One day, Princess Aurora is wandering the Market when she discovers something for sale: a mysterious staff that looks strikingly like Maleficents. Aurora quickly purchases it and brings it to someone who might know exactly what it is, and confirm or deny her suspensions: Maleficent herself.
Partner: Maleficent
Allies: Elsa, Namaari, Voyd
Disc power: When Aurora uses her green skill, she heals the ally with the lowest hp

Many grammatical errors aside these are the most glaring issues:

Basic attack: Aurora pulls various objects out of her basket

Ok, great… then what? Or is she just pulling them out to show to the enemies…

That is quite excessive and would seriously reduce her effectiveness if paired with someone that grants energy as she would enter a sleeping loop. I’d reduce it to 3-5 seconds so she still has that period of immobility but isn’t out for as long.

her dress changes to blue, then back to pink

Aurora can only use this once per wave.

Yeah… no. The skill is far too weak to be limited to once per wave. Also how long does the blind last for?

You’re missing a variable for this skill.

and grants the ally a Shield that lasts the rest of the wave.

Does the shield have HP? Otherwise that’s just perma-invincibility…

Please fix the formatting for the friendships as it’s so clunky… no one’s gonna bother to read it.
You’re also missing a minimum of 1 additional variable per disk.