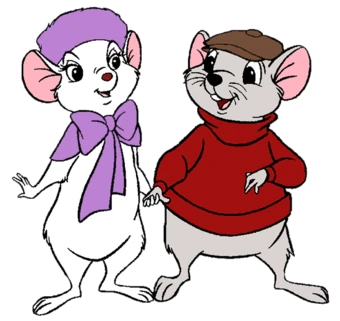 Entrance: Both walks into the battle, Miss Bianca walks with an open umbrella and when she is at her final position she closes and hides her umbrella.
After rank green: During Orville’s landing both mouse jumps out from albatross with an open umbrella, slowly going down to the ground.
Victory: Both jumps with excitement, later Miss Bianca gently kisses Bernard on the cheek, which makes him blush.
Defeat: Both have depressed face expression, Miss Bianca starts to cry and Bernard hugs her to cheer her up after a failure.

Quote: “Sure wish we had taken the train!”

Basic attack: Miss Bianca sprays perfume on her, healing HP and then throws bottle of perfume to closed enemy dealing damage to the target.

White skill: Planning the Action
Bernard and Miss Bianca scan the battlefield, studying the enemies for 15 seconds, removing from them X armor and stunning enemy with highest skill power for 12 seconds.

Removed armor doesn’t have any duration and lasts for whole battle and stacks with each use.

(normal damage)
Orville lands and then crash on the battlefield, he slides through the battlefield dealing X damage and knocking back enemies while passing them.

Blue skill: Rope of the Solve

(normal damage)
Bernard and Miss Bianca separate to two different places while holding a rope, they run through the battlefield, dealing X damage to enemies when passing them.
The nearest enemy to them is stunned for 10 seconds.

Purple skill: The Aids of Rescue Aid
At the start of each wave, the player chooses on the type of disable.

Allies will be immune for the whole wave to the selected disable, all other types of disables duration will be reduced by 50%. Each time when an ally is disabled their HP is healed by 5%.

While the battle is on auto, the stun will be always selected.

Healing is reduced on allies below level X.

Red skill: Help on the Need
For the first time on the wave when an ally’s HP falls below 30% they gain invincibility for 7 seconds.
This triggers once, on each ally per wave.

Each time an enemy uses their White Skill allies gains X armor and X reality for the remainder of the wave.

Invincibility duration is decreased to 1 second on the allies above level X.

Alice - A Child in Need

This seems quite OP but I really like it!