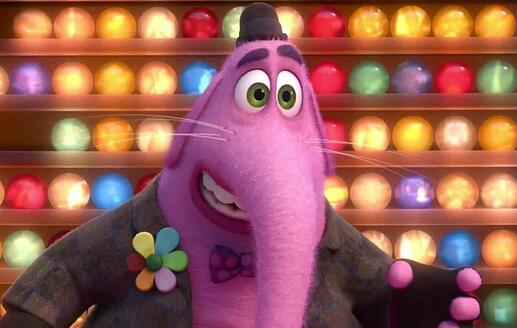 Bing Bong is the colorful, playful, imaginary friend, whose skillset for allies and against enemies is just as wacky as you’d expect.

Passive: Every time Bing Bong attacks, he gains a stack of Imagination. Imagination gives Bing Bong and his allies a 2% chance to block a crit or disable per stack. Bing Bong can have up to 10 stacks.

Active: Bing Bong plays a little song with his trunk, giving his allies 20 energy per stack of Imagination he has. Those stacks disappear afterwards.

Green Skill: To The Moon

Bing Bong rides in on his magic rocket, dealing X fantastic damage for 3 passes. After those passes, he jumps off, and the rocket explodes on the enemies, dealing X more fantastic damage, and removes 1 random buff from each enemy. This also gives Bing Bong 2 stacks of Imagination.

Bing Bong clicks and whistles, stealing 2 random buffs from the closest enemy, and gives them to himself. He also gains 3 stacks of Imagination.

Bing Bong’s max stacks of Imagination is now 25, and “To The Moon” ends early if a single enemy has three buffs.

When an ally is KOed, Bing Bong revives them with full health, and gains 5 stacks of Imagination.
Bing Bong gains 1 stack of Imagnation every time an ally or enemy uses their white skill.
Bing Bong applies 2 stacks of Fatigue to enemies that got their buffs stolen from “Part Dolphin.”

Entrance: Rides in on his magic rocket, and jumps off, doing a fun pose.

Victory: Does a little jig.

Defeat: Sits down and cries candy.

Basic Attack: Tosses a random memory orb from his bag.

Campaign: Journey to Imagination Land
Description: With Joy and Bing Bong reunited, the two go off to the edges of the city to find a so called “Imagination Land.”
Campaign Heroes: Sadness, Manticore, Kermit

Memory Disk: Concentrated Rainbow (Disabling To The Moon)
Appearance: A glass bottle with a rainbow inside of it

+X Skill Power per Inside Out hero
Enemies are scared for 1 second from the first hit of “To The Moon” (+2 per star)
“To The Moon” saps enemies for 2 seconds per buff on them on the final hit. (+0.5 per star)

Campaign: What Are We?
Description: Bing Bong and Gonzo learn to appreciate each other for being creatures of odd features and traits while going on a crazy stunt show throughout the city.
Campaign Heroes: Fozzie Bear, Goliath, John Silver

This is your third concept in ONE day… take some time between them.