Can’t even beat easy City Watch - help! (Thanks for the advice!)

Yes Easy CW is broken and the opponent scaling Is out of control.
They base the seeding of the Watch on your T5 chars, so long term something to keep an eye on.

-Try creating suicide squads that you can throw at difficult nodes to just weaken the enemy lineups enough for your A- team to finish them and advance. Sometimes just try and take out one character: Especially with some like maximus/minnie who break up your team synergy.
Warning: these teams must also meet challenge reqs.

-Judy’s support ally buff through her disk w/Felix helps give support chars a major Damage increase, her rapunzel, tron, Li shang, animal and rafiki can put some hurt on.

-For bulletproof healing: rafiki w jackjack disks : healing breath and gerald & marlin can keep your teams bouncing back even after heavy AoE hits.

-Freeze will probably carry you the farthest. It is accessible and just works well.

-Merlin works well at removing annoying enemies until you can focus your assault, but is a stalling tactic and requires switching between manual/auto.
Without Beast/mulan/stitch using Basil will generate plenty of energy and he is a killer on his own right.

-I would also recommend that rather than resetting: switch to your regular team and finish out the Watch to collect the tokens. Don’t leave all that gold and shop currency on the table.

-Gah I hate to suggest it because its a waste but ; When I did the Zurg and later Toys to the Rescue challenges I went to the Enhancement Shop and filled up some badges for mainly HP/armor but it can be a huge uptick in power.

Good luck, Don’t give-up! I almost quit when Easy Watch was unbeatable but just keep working at your top 15 chars and you will build a big enough stable to insert as needed.

Thank you all so incredibly much! I appreciate the advice and commiserating immensely! I did end up having to reset and retry, keeping an eye on the white skills of characters that were recommended in this thread. What ended up working for me was the team below, although I used Facilier for most of it before swapping him with Li Shang for a particularly robust Powerline/Maximus/Minnie/Cheshire/Mulan team at Wave 5. 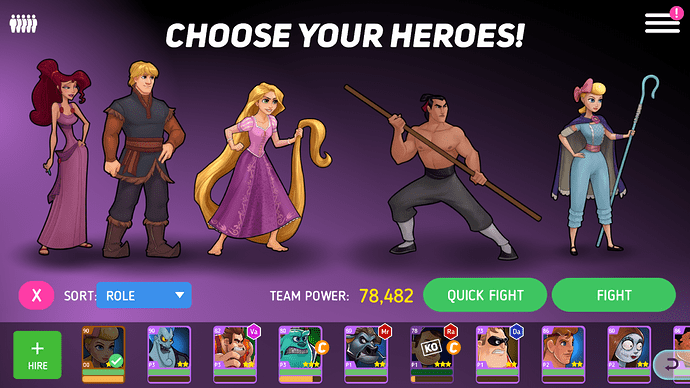 So frustrating that easy is so difficult, especially when the challenge eliminates Damage heroes. Hopefully this thread helps others, too!

What ended up working for me was the team below

I’m glad you already got through, but still like to give a general tip for CW. Try to not use yoyr white skill in the earlier more eazy fights. Also try to use different heroes in the first few regiobs (1-3)

In that way, you’ll later have enough heroes with ready white skills to tackle difficult line-ups