Since I haven’t done a hero concept in a good while, here’s Carapace from Miraculous Ladybug. 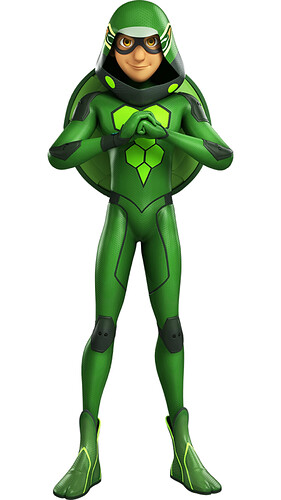 Quote: “So awesome! But aren’t you at least a bit surprised that I’m Carapace?”

Description: Carapace uses his Shellter to shield his allies and control enemies.

Defeat: Tries to hold up his shield, but it falls down.

Carapace hoists his shield up in the air, Cleansing himself of all debuffs, healing himself for X HP, and becoming Invincible for 8 seconds. Allies are shielded for X HP over the duration.

While shielded, Carapace’s allies also have their damage increased by 50% for 8 seconds.

Carapace throws his shield, dealing X damage and knocking back enemies and stunning them for 8 seconds. This attack also removes all active buffs from them.

The buff removal has a chance to fail if enemies are above level X.

If Carapace or an ally’s shield is removed before the duration reaches 0 seconds, they are granted Invincibility for 5 seconds per buff removed.

This buff cannot be removed or blocked by Fatigue.

The invincibility has a chance to fail for allies above level X.

Each time Carapace uses Shell-ter, his maximum HP is increased by X and all damage he deals is increased by 50% for the rest of the wave. Additionally, enemies are Distracted by Carapace while he is Invincible.

The Distract has a chance to fail against enemies above level X."

Each use of Shell-ter now also increases the damage Carapace’s allies deal by 20% for the rest of the wave. This has a chance to fail on allies above level X

Is Charged When: Heroes perform 16 or more Basic Attacks

Gadget personally asks for Carapace’s help to use his shield to protect the Rescue Rangers from big dangers.

Which tier do you rank Carapace?

Seriously? You just HAD to do that? Really off topic and rude, mate.

Uh, why do so many people bring up my dead topics to post unimportant and irrelevant things?

Just ignore them if they do. No need to ask about every single time, especially when it’s a case like this one where the comment doesn’t 100% relate to the concept itself anyways.