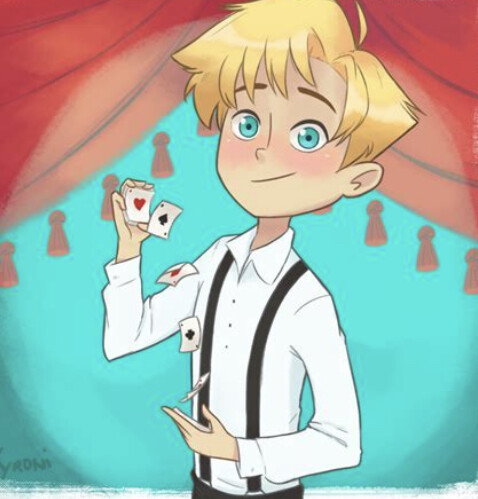 Description: This young magician can trick opponents into shreds and control the battlefield.

Entrance: Carter will walk in while shuffling a deck of cards

Basic Attack: Carter will pull up a ace of spades stunning the closest opponent for 4 seconds and adding 1 stack of hardy.

Carter can do this once every 6 seconds.

Defeat: Carter will fall backwards with his cards falling out of his hand.

It will also slow down an opponent by x2 for 5 seconds.)

Green Skill: The Magic Man (Carter will put a cover over him reappearing 2 seconds later on the enemy team stunning the mid opponent(s) for 5 seconds.)

(Carter will shoot stars out of a magic wand dealing 7556 fantastic damage.)

(Sleigh of Hand will now stun opponents for 11 seconds and Baton Bash will dealing 17550 fantastic damage.

“To Infinity… If Possible”

Buzz tries to help Carter with his doubts about everything.