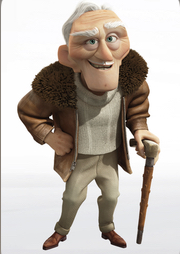 Description: Weilding his shotgun and his large pack of talking dogs. Charles can make sure you will never be remembered.

“Adventure is out there!”

Entrance: Charles will walk in wielding his trusty shotgun in his hands with Alpha closely following behind.

Victory: Charles will laugh in an evil manner while Alpha howls.

Defeat: Charles will stomp on the ground and Alpha will duck and whimper.

White Skill: Talking Dog (Alpha will howl at the closest opponent creating a shockwave which will stun the enemy for 5 seconds and deal 1034 fantastic damage

Red Skill: Talking Dog(s) 2 (Now Charles’ Talking Dog ability will now bring out 2 more dogs once the ability is used each dealing 3034 normal damage. The extra dogs will disappear when the attack is finished.)

Charles has to take care of Bolt and the rest of his dogs for a day.

Charles wishes to not have to take care of his dogs for a day and relax.

This is a good concept but I don’t really understand why he is a tank. He seems more like a control or damage

Slow. Down. This is your third concept in 2 days. Take more time between concepts to make them better as they are currently not very good.

Shoot. I thought you stopped using your advantage over the community 5 months ago. Guess I was wrong.

What’s that supposed to mean?

Depends. How do you want to interpret it?

Maybe if you actually heeded his advice and stopped spamming roughly-made concepts, this wouldn’t be an issue.

I told you guys this once already. I wrote these concepts down in a journal for about a month, and then I start uploading them everyday for a week and then the cycle repeats.