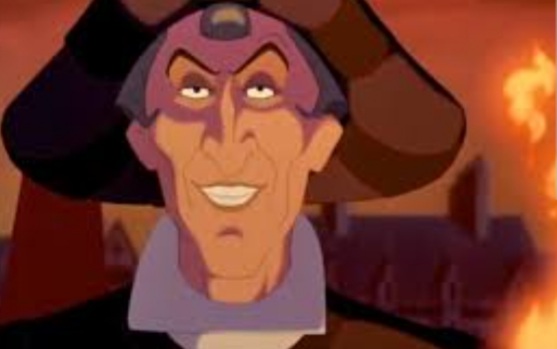 Bio - The evil judge of Paris, Frollo is here to cleanse the city of what he considers evil. But beware, he will do anything to make sure he gets what he wants.

Defeat - Frollo falls to the ground and reaches to the sky with one hand.

White Skill - Yes Master
Passive: Instead of a basic attack Frollo applies a stack of control to the backmost enemy every second. Enemies with control deal 50% less damage to Frollo and his allies. Charms applied by Frollo can’t be blocked by hardy.

Active: Frollo points towards enemies charming enemies for 5 seconds for each stack of control they have. He also applies 3 stacks of control to a random enemy. All stacks of control except for the 3 Frollo just applied are removed.
The extra control stacks being applied have a chance to fail on enemies above level x.

Green Skill - Let Paris Burn (Normal Damage)
Frollo throws a flaming torch towards enemies dealing x damage to all nearby enemies. He deals x damage over time for 4 seconds to enemies with a stack of control for each stack they have.

Blue Skill - Review Your Alphabet
Frollo pulls out his alphabet book and reads from it applying reflect for 8 seconds and slowing all enemies movement and attack speed by 40% for 10 seconds.
The slow has a chance to fail on enemies above level x.

Purple Skill - Eyes of Notre Dame
At the beginning of battle Frollo studies 2 random enemies. The study lasts for 8 seconds. Studied enemies deal 25% less damage to Frollo.
The study has a chance to fail on enemies above level x

Red Skill - Hellfire
Whenever Frollo applies a stack of Control his attack and movement speed are increased by 50% for 9 seconds.
“Let Paris Burn” now scares all nearby enemies for 5 seconds.
Once per wave when Frollo falls below 0 hp he heals himself to max hp and cleanses himself. He then becomes berserk for 8 seconds. Frollo gains 250 energy every time he becomes berserk.

Frollo and The Sheriff Of Nottingham
Name - Captain of the Guard