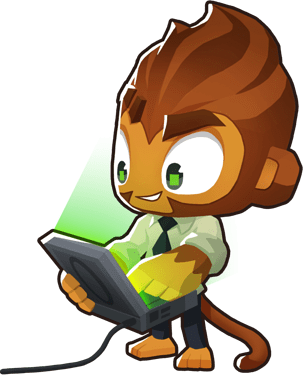 “Rule are made to be broken!”

Using his elite hacking skills, Benjamin corrupts enemy files and boost allies for the cause.

Role: Support
Position: Back (he doesn’t move from this position)
Trial Team: Blue
Entrance: Simply walks in and gets tablet out, ready for battle.
Victory: Tablet shuffles through different shapes, like Kevin Flynn
Defeat: Looks frustrated as tablet crashes
Attack: Uses his tablet to send two different hacks at once (HP and Damage)

Passive: Benjamin uses an HP hack to heals all allies Y HP each time he uses his basic attack. He also sends a Damage hack to the closest enemy, dealing Fantastic Damage instead of normal damage.

The player chooses which enemy to receive the “Bloon Trojan” for the remainder of the wave. This cannot be blocked by any Hardy stacks.

While the enemy is affected by the “Bloon Trojan”, they deal 30% less damage and heal 50% less HP from any of their skills. They also receive X damage every 5 seconds.

While on auto, Benjamin chooses the enemy with the most Skill Power.

Benjamin applies a reinforced shield that has X HP to allies every 12 seconds.

Reinforced shields cannot be removed, stolen, or bypassed, and they ignore up to 50 Armor Negation and Reality Negation against them.

“Biohacking” now reduces all enemies skill levels by 5 for it’s duration, and the enemy with the Bloon Trojan has their skill levels reduced by 10.

The skill level reduction is reduced against enemies above level Z.

“Bloon Trojan” now removes 1 active buff from the enemy every 2 buffs applied to them.

While “Biohacking” is active, 50% of the damage Benjamin and allies deal is True Damage.

These effects are reduced on enemies above level Z.

Also in the white skill it sounds like you are healing enemies, maybe put “Benjamin then deals the same amount of healing from allies to enemies as damage.”

Other than that, it’s a great concept!

Oh. I still thought someone revive the topic. Nvm