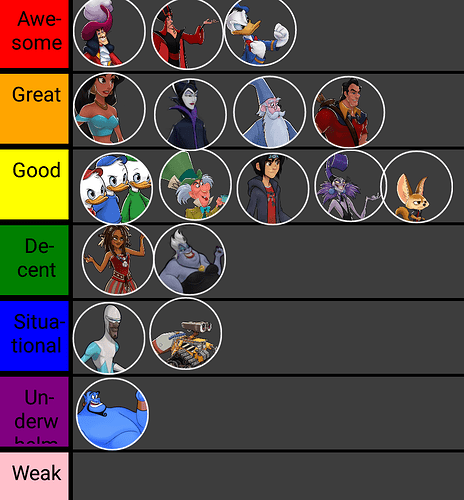 Would you mind explaining why they are in that category?

Yeah… those in “OK” and below don’t deserve to be there. Except Genie. He is the only “OK” character.

Maleficent and Donald are awesome.
Donald’s absorption ability is very very useful against controls. Maleficent is pretty much your go to control heroes is you need team control around the start of battle, plus one of her discs removes energy.

Hiro is great. Control back line quite well plus his ultimate give some control against front damager.

Yzma is Good or perhaps even situational. Her skills are quite random and sometimes it works but also can bite you hard.

Finnick is Good and with the right lineups he can be Great. His Judy discs can at least control one of high front damager with slow. His other disc allows him to repeatedly do a lot of team damage if not stopped.

Ursula is OK but can be considered Good as well. Her R3 gives her a lot of evasion and with maxxed Tia disc she could boost her chance to ultimate quite early in battle.

Mad Hatter used to be Good but he is Situational now. His slow is the only good thing but takes a long time to get his ultimate and his damage is just alright in R3.

Collette can be Great or even Awesome. Will see depending on how her damage is as a control. Her onion skill is gonna be a fun one but also will see how early in battle does she use that skill.

Sigh… oh Genie… how I wish it was you who got the refresh. You needed it more than Stitch or Mr. Incredible in my opinion.

Still! At the very least, I can confidently say Genie is one of the very best heroes for Team Blue’s Invasion! His niche as Team Blue’s best healer remains unchallenged!