Hello everyone! I’m finally back with another unlikely concept! To go alongisde @Lucky-Oswald’s Mercedes concept, here’s one of her best friend Annette! 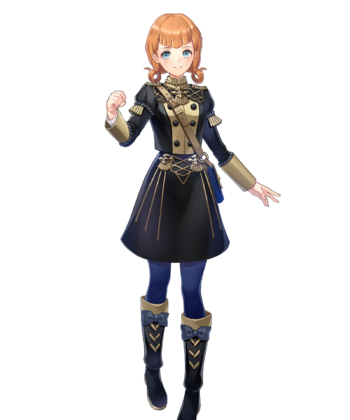 Description: Ready with Crusher and a song, Annette is here to take down foes and support her allies. Just don’t let her anywhere near the kitchen.

Animations
Entrance: Annette walks in with Crusher in hand.

Defeat: Annette lowers Crusher and kneels on the ground.

Active: Annette sings a cheerful tune, healing all allies for X HP and increasing their Armor by 40% for 10 seconds.

Green - Abraxas (Fantastic Damage)
Annette casts Abraxas at enemies in front of her, dealing X damage to them over 6 seconds.

Blue - Perseverance
Annette rallies the frontmost ally, increasing their basic damage by 50% and granting them X skill power for 8 seconds.

Purple - Crusher Rally
“Cheerful Tune” and “Perseverance” also increase allies’ movement speed by 100%. This has a chance to fail on allies above level X.

Really great concept! I haven’t played three houses because I don’t have a switch, but I have watched some videos!