Here is a concept of our favorite robot… @discobot! Hope you enjoy it and at the end please post all feedback 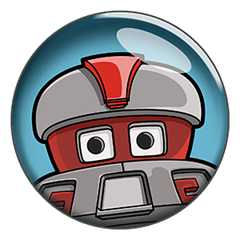 Quote:
-@discobot display help
-I currently know how to do the following things
Position: back
Role: Support
Trial: Red

Entrance: It floats to its position
Victory: It says an inspirational quote to its allies
Defeat: It gets bugged and doesn´t answer anymore
Basic attack: See white skill

White skill: Fortune
Passive: instead of basic attack its allies start asking fortunes to discobot, each question gives discobot 1 stack of fortune and he remembers which allie asked the fortune, discobot can listen to a fortune every 3 seconds.

Active: Discobot starts answering the fortunes, giving 1 or 2 different buffs for each answer he say to its allies, he also takes out one stack of fortune each time it answers a fortune:

Green skill: Roll 1d100
Discobot roll a dice with 100 numbers, the dice pass through the enemies dealing X damage, depending on the number is on the dice when it finishes rolling is the percentage used to increase the attack speed of the allies, the dice rolls for 4 seconds, the increase of attack speed can fail if the allies are above X level.

Active: Discobot starts a tutorial increasing the basic damage of the ally by 100%, then the allie can start an advanced tutorial making the allie precise, both tutorials lasts 5 seconds.

Purple skill: Discobot 2.0:
The first time discobot reaches his 0% max HP he revives as Discobot 2.0, it heals X HP and become invincible for 10 seconds, but all the buffs applied by discobot 2.0 lasts the half the the original discobot.

Red skill: Discobot fun:
Each time discobot or discobot 2.0 applies one buff to an alliy the tenacity of it and its allies is increased by 5% for 10 seconds, the increase of tenacity can fail if the enmies are above X level.

Discobot/Hiro Hamada
Defensive upgrade
Allies: Jessie, Nick Wilde, Colette
Buff: If all discobot´s allies have more than three buffs their evasion is increases by 10%
+10% per star

I currently know how to do the following things:

Starts an interactive tutorial just for you, in a personal message. {name-of-tutorial} can be one of: tutorial, advanced tutorial.

You may rely on it

Uhhhh in case I am making a giant topic about more help stuff like explain the lore of a character or simulate a heist with the following characters.

I currently know how to do the following things:

Starts an interactive tutorial just for you, in a personal message. {name-of-tutorial} can be one of: tutorial, advanced tutorial.

Never let lack of money interfere with having fun. —

You may rely on it

Is Discobot a character from somewhere?

Discobot is just a bot here